"Hey guys, look at me. I'm the guy behind Cobbledump, and I'm gonna show you something that's been bothering me for a long time. A technique to make Nether portals that's really fast, and doesn't seem to be used by most people in favour of a really stupid method of building Nether portals." -Cobbledump's first video, a Minecraft tutorial 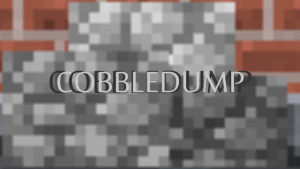 Cobbledump is a YouTube channel centered around Minecraft and the adventures of one New Zealander playing it with or without friends, known as Edwardos or just Edward. The channel started out in 2016 as something of a joke and as a way of gaining entry into a Minecraft video server, calling itself "the most bearable Minecraft channel on YouTube". The first episode of his premiere series was named "The Microphone" after the fact that the microphone wasn't working properly. There is even a playlist containing all the videos the channel has ever uploaded, which tells you "Oh boy, that can't be easy to marathon."

Eventually, the channel grew into something that took itself more seriously, and many of the self-deprecating jokes ceased, but Edward's mannerisms and funny quirks stayed - including the cynicism towards big channels like Xisumavoid and more annoying aspects of the game.

Cobbledump sets itself aside from the majority of Minecraft channels by doing a few things. First, there is a lot of swearing and distinctly non-G-rated themes, which is something of a rarity in today's most well-known Minecraft videos.

There is also no singleplayer series taking place in default, current day Minecraft in Cobbledump. All the singleplayer videos either take place in a Customized world or an old version like Minecraft Alpha.

Third, there are a lot of edits. Cobbledump's footage is cut many times per episode and results in a kind of collage patchwork of a Minecraft video.

Fourth, Edward has made it clear before that he has misophonia, so unlike many let's players the world over, he goes to extensive lengths to make sure his audio is free of loud mouth smacks (a mysterious phenomenon sometimes known as "lishing"), which is a really good thing for some people.

The channel has been deleted since late-2019, due to the creator taking issue with the way YouTube handles its business. There were more than 120 videos on it, spanning about three running series, more or less: Minecraft Alpha and the Nostalgic Veteran, a series about acquiring every possible item and block within an old version of the game; Mine Zealand, a series about a Minecraft video-server and the people who play on it; and Hardcore Minecraft Preset Challenge, which is a singleplayer series based on surviving unusual customized worlds set to Hardcore Mode so that he can only die once per preset.