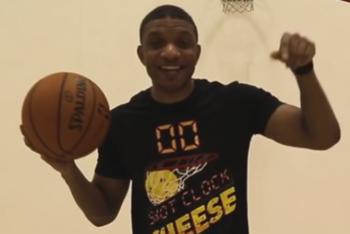 "What pic could possibly be Smoover?
"Spla-a-a-a-ash!!"
One of his many Catch Phrases. He says this whenever he scores a 3-pointer in a basketball game, or when something explodes or literally splashes in the water (in other games).

is a personality from Florida in the Let's Play community, notable for his NBA 2K14 career and his slew of Catch Phrases. Additionally, unlike many Let's Players, he never introduces himself by name or by game (except for the first) at the start of every episode.

He also has a Twitch channel, as well as a store

with T-shirts and iPhone cases with his Catch Phrases printed on them.