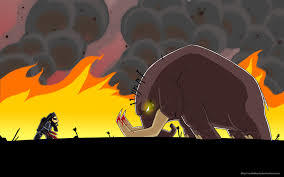 Engraved on the wall is a masterfully designed image of an elephant and a dwarf by 'Sankis' Gatinbromek. The elephant is striking down the dwarf
I take a look at the maps, and sure enough, this outpost is stuck out in the middle of nowhere, smack in the Smooth Points of Pride. "Boatmurdered" they call it, a name which doesn't bode well for much of fucking anything.
WELCOME TO FUCKING BOATMURDERED! Hope you like miasma!
— StarkRavingMad
Advertisement:

In the year 1050, the dwarven civilization of Kinmelbil, "The Oaken Tomes", exhausted the last of its mines. Driven by lust for gold and rumors of the priceless and all but mythical metal adamantine, a team of seven colonists was dispatched to build a new home for the dwarves of Kinmelbil in the Smooth Points of Pride. The first year of diaries from the ill-fated foreman of the mine were recovered, giving some hint as to the beginnings of the fortress that once stood there, if not its mysterious and presumably gruesome fate...

So begins the tale of the dwarven settlement of Koganusân, better known as "Boatmurdered,"

a tale horrific even by Dwarf Fortress standards.

The game started innocently eno... actually, no, from the very beginning the poor dwarves were plagued by murderous elephants. Then came the food shortages. And the goblins. Then the floods. And then the lava. All of this was compounded by the usual problems of a succession game, with leaders at odds over how to run the settlement, half-finished and forgotten projects, an increasingly labyrinthine fort layout, and outbreaks of megalomania and supervillainy.

Like all Dwarf Fortress games, the Let's Play ends violently. By the end of the thread the fort is in ruins, but everyone agrees that they've created the root of evil in the dwarven universe.

Perhaps the Let's Play for Dwarf Fortress, Boatmurdered was a Succession Game played in one-game-year turns by Something Awful members that quickly became the stuff of legends.

You can find an audio adaption of Boatmurdered here.

The Boatmurdered saga provides examples of:

Thus ends the official written history of the fortress known as Boatmurdered. May their tortured souls rest in peace.