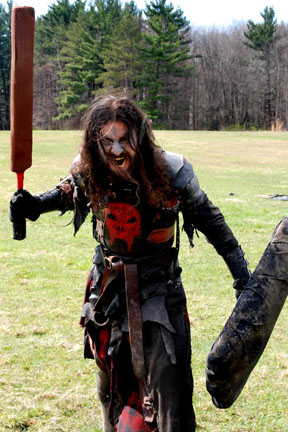 A participant in costume.

is a full-contact medieval fighting game. Unlike the SCA, it contains high fantasy elements (goblins and orks, elves, demons, and the like) and uses boffer weapons (soft and foam-covered for safe impacts). It focuses primarily on the combat and is low on "roleplay" elements compared to many fantasy games, but is nevertheless best categorized as a LARP.

The game is played on an "honor system

" of limb loss, wherein a "solid" hit to the arm or leg results in the loss of that arm or leg, and losing two limbs or being hit in the torso results in death. The relative simplicity of the combat system is one of the major draws of the game. The other is that participation is typically inexpensive, with most events costing $3-20 and the costuming standards easy to meet using homemade articles.

Dagorhir holds a number of national events (both single-day and weekend-long) throughout the year, but the biggest is Ragnarok

. This large event is the week-long annual gathering of all "Dagorhirrim" in central Pennsylvania, at the same campground where the SCA holds Pennsic. At Ragnarok one can expect to find campsites surrounded by everything from rope fences to wooden walls, hung with banners and decorations that tell you what group is camped there. Merchants will sell you medieval garb ranging from the fanciful to the extremely period-accurate, both Dagorhir-legal and live steel weapons, feast gear, jewelry, and an array of other things (in 2011 there was a photographer offering to "paint portraits"). Daily fighting takes place in which groups participate in varying battles ranging from simple two-team deathmatch battles to capture-the-flag or "conquer the castle" type scenarios. At nighttime there is drinking, dancing, and an abundance of parties ranging from the Undead Rave to the Gypsy Hafla to Mardi Gras. This fight-then-shop-then-party setup is common at weekend events as well.

Geographic areas are organized into chapters called "realms", which hold smaller events in their area. Separate from these are groups called "units", which are groups of people that camp together and/or fight together on the field, and often are made up of a number of people from the same realm. Units tend to have distinctive color schemes, characterization, and style, but each unit is often wildly different from the next. Because there is no definitive time period set for "Dagorhir", characters and units come from a wide range of time periods. This results in extreme anachronisms and oddities like watching thirteenth-century Vikings team up with goblins to fight Roman legions, or Narnia getting in a fight with Mordor.

Participants run the gamut of ages, although a person has to be sixteen before they are allowed on the combat field, and typically no one under eighteen is allowed to attend large national events without a parent or guardian present. Women remain a minority, but this has improved over time. A harassment policy was recently adopted, to much positive fanfare.

A closely related organization is Belegarth, which spun off from Dagorhir in the early-2000s due to differences in leadership. Belegarth's rules are largely compatible with Dagorhir's and there remains a significant amount of interchange between the two, with Belegarth groups often participating in Dagorhir events and vice-versa.