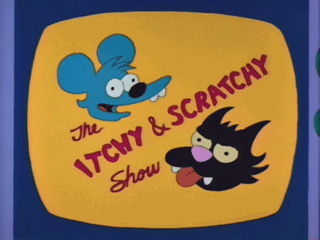 The Itchy and Scratchy Show is a Show Within a Show on The Simpsonsnote which itself was a Show Within a Show, from The Tracey Ullman Show. It passes itself off as a cat and mouse chase, based on the old cartoon shorts of Tom and Jerry and Herman and Katnip (mostly the latter). The cartoons are usually aired during The Krusty the Klown Show.

The show was part of The Simpsons since the first season, and since Season 2 there have been episodes directly involving the company that makes the cartoons, establishing a rich history/backstory that starts in The Silent Age of Animation and hits many of the medium's high and low points in the West. They even got their own Video Game or two as well as a short comic book series (which crossed over with BartMan in the When Bongos Collide story).

This Show in a Show provides examples of: