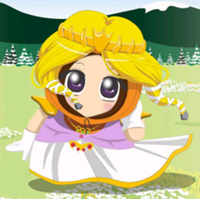 A Note from Eric Cartman Okay, you dumbasses. Apparently Kyyyinny's been going through his "Japanese Princess" phase again and wants to pretend that there's some shitty weeaboo anime show based on his adventures. He wants this page to tell everyone how much of a hot chick he is, but I don't want people to believe him, so I snuck a few potholes in there so that you get taken to the actual trope page when you want to read more. So clicking on an Even the Girls Want Her link would actually take you to the Even the Guys Want Him page. And to make sure you don't all start gushing over his lovely man-boobs, I'm editing and moderating this page to make sure any sort of character bias is fair and balanced. Just roll with it.

Princess Kenny (プリンセス♥ケニー) is a 2013 Japanese anime series by Studio SPARK. The series follows the adventures of the titular Magical Girl as she helps the Sony Corporation win the Console Wars and fights for her acceptance as the land's beloved princess. Encountering wizards, elves, tentacle monsters, Nazis, zombies and Nazi zombies, Kenny must use her powers of true love to help out her friends on her quest and fight the evil Wizard King. And sell more PlayStation 4 units.

Full episodes can be watched online for free here

, and reviews can be found here

Administrator: MumblingPerv, you have broken wiki rules too many times on this one page. As punishment, you will be fed to a tank of hungry sharks. Thanks for troping!
Kenny: MMMMPHMMMMM! FMMMMMMMAAAAAAAAAAAA!!!! (gets eaten by sharks)
Stan: Nante koto! Princess Kenny o koroshita!
Kyle: Anata ga deki sokonai!