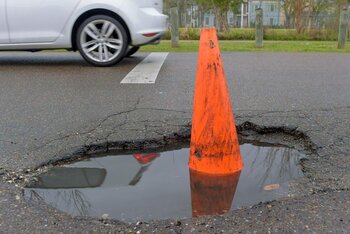 It's not that deep, I'm sure.
Advertisement:

The bane of drivers everywhere.

Potholes are indentations in roads and highways caused by groundwater underneath expanding and contracting with temperature, which weakens the ground. Cars passing overhead, with how heavy they are, push them down. (When they aren't pushed down by cars, instead the ground collapses under its own weight, that's called a Sink Hole.)

With how they can shake cars up that go over them too fast, they can be pretty dangerous, so they're supposed to be routinely fixed. If you suddenly go from a smooth road to one so riddled with dips that it's a trypophobia hazard, that can be a sign that you've entered the Wrong Side of the Tracks, or that there's something wrong with the local environment. If everywhere looks like the road is paved with sponges, it's often a sign of an Obstructive Bureaucracy.