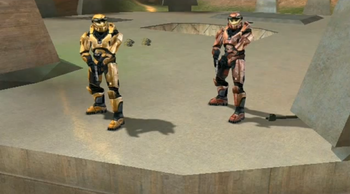 "I've only been listening for like five minutes and I can already tell they're really in love. Why can't they see it?"

Red Vs Blue is positively full of examples of Ho Yay in action. Fair warning for Late Arrival Spoilers in regards to Season 16 and all other seasons beyond this point!