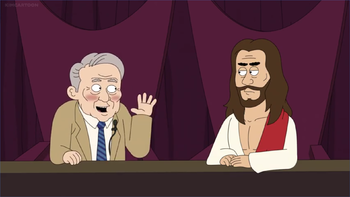 The show constantly likes to turn established characters into deranged perverts, who get involved with such perversions as bestiality, incest, rape, adultery, sadomasochism, omnisexuality, pedophilia, necrophilia, and fat fetishism, which, although not parts of the LGBT community, commonly overlap with their gay jokes.

Ass on the Line

Tucker Carlson is a Huge Dick

The Father, The Son, and The Holy Post-It Note