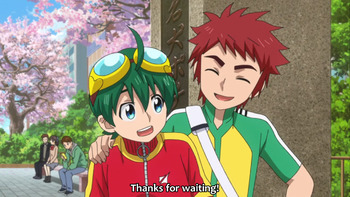 Haru and Yuujin- Meet Cute!
While usually under the radar, the one trait of the spin-off that surpasses all the previous installments in the franchise is the sheer dosage of Ho Yay.

Pretty much any scene involving Haru Shinkai and Yuujin Oozora