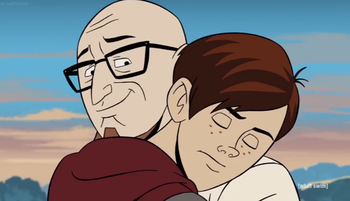 "I love you, pop".
Advertisement:
open/close all folders
General
Season 1
Season 2
Season 3
Advertisement:
Season 4
Season 5
Season 6
Season 7
Specials
Advertisement:
Meta
Someone wrote into the online advice column, "Dear Prudence", under the guise of Hank. Instead of it going ignored, the writer gets a legitimately sincere answer;

Q: Dad has a clear favorite: For as long as I can remember, my dad has clearly favored my twin brother, “Dean,” over me. It’s a little bit ridiculous. All of his friends acknowledge it and joke about it. Our dad has always thought Dean to be the smarter one, encouraging him to study, go to college; taking him to internships; and talking about his bright future. He even shared his beloved record collection with only Dean. To me, he makes offhand comments about how menial labor might be what I’m destined for. How can I not let this affect my relationship with Dean, who actually is a great guy and asks for none of this?
A: I think it’s admirable that you want to maintain a good relationship with your brother despite years of painful and obvious favoritism, but I hope you don’t feel that you can only do this by minimizing or ignoring your sadness at being slighted. It may help to talk to Dean about this—not in a way that assigns blame to him, or that asks him to fix your father, but simply to acknowledge reality and be honest about how it makes you feel. It may also help you to say something to your father: “Dad, it hurts when you say that I’m destined for menial labor and spend a lot of time talking about Dean’s bright future. Please stop.”