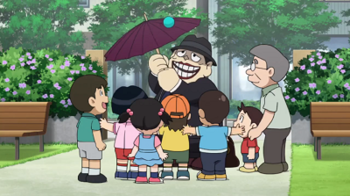 Even the devil (or whatever he is) can have a soft side.
Advertisement:

Just before Moguro makes things worse for his customers, there's always something heartwarming before it all comes to an end.

Episode 64: "Love Across the Glass"

Episode 4: "The Woman On The Platform" / "Runner’s Paradise"

Episode 5: "Sunday Club" / "The Woman Who Throws Away"

Episode 7: "The Man Who Transformed" / "The Rule of Mommy Friends"