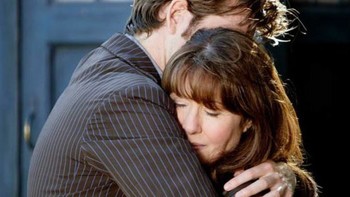 Sarah Jane: Goodbye, Doctor...
The Doctor: Goodbye, my Sarah Jane.note It's been thirty goddamn years folks, and we've finally gotten the hug we all wanted and needed!
Advertisement:

Heartwarming moments from Modern Who.

The End of the World

The Parting of the Ways

The Girl in the Fireplace

Evolution Of The Daleks

Human Nature The Family of Blood

The Sound of Drums

Last of the Time Lords

Voyage of the Damned

The Fires of Pompeii

Planet of the Ood

Forest of the Dead

Planet of the Dead

The End of Time

Victory of the Daleks

The Time of Angels

The Vampires of Venice

Vincent and the Doctor

Day of the Moon

The Curse of the Black Spot

A Good Man Goes To War

Night and the Doctor

The Wedding of River Song

Series 7 / Season 33
The Doctor, The Widow and The Wardrobe

Asylum of the Daleks

Dinosaurs on a Spaceship

The Power of Three

The Bells of Saint John

The Rings of Akhaten

Journey to the Centre of the TARDIS

The Name of the Doctor

The Night of the Doctor

The Day of the Doctor

The Time of the Doctor

Mummy on the Orient Express

In the Forest of the Night

The Girl Who Died

The Woman Who Lived

The Husbands of River Song

The Pyramid at the End of the World

The Lie of the Land

The Eaters of Light

Twice Upon a Time

Arachnids in the U.K.

Demons of the Punjab

It Takes You Away

The Battle of Ranskoor Av Kolos

Fugitive of the Judoon

Can You Hear Me?

"Revolution Of The Daleks"