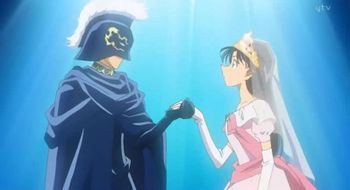 The Knight (Shinichi) and the Princess (Ran).