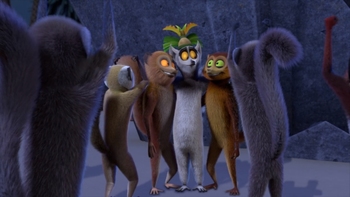 Hey, he really loves his people!
King Julien is a Jerk with a Heart of Gold, but when his heart shines, it SHINES.
Advertisement:

Oh Brother Where Aren't Thou

Revenge of the Prom

The King and Mrs. Mort

For Whom the Bell Tolls

The Day After Yesterday

The Day Before Tomorrow

King Julien Is Watching You

The End Is Near

The End Is Here