The King's chief minister was Haman, a man who hated the Jews. Esther's uncle would not bow down to Haman. Haman was so angry that he plotted to have all the Jews killed, and he drew lots to decide on the date. The Persian word for lot was Purim. Anyone who went to see the King without permission was put to death, but Esther was brave enough to tell her husband of her religion. The King forgave her and Haman was put to death. The full story is read aloud at the synagogue. Every time Haman's name is mentioned the children stamp their feet, boo, hiss and shake rattles in an attempt to drown out the sound of his name.
—BBC Bitesize Guide to Jewish Festivals

, on the custom of Jeering at the mention of Haman's name on Purim. 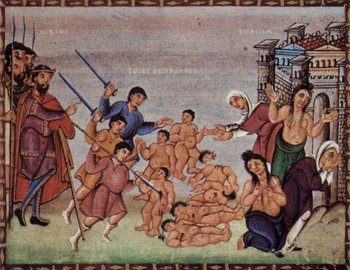 Murdering babies was, and still is today, indeed a special kind of evil...

Aside from the typical Values Dissonance attributed to the scriptures, The Bible boasts many characters that stand out as truly reprehensible.