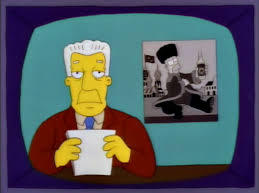 "I told him that photo would come back to haunt him!"
Moments pages are Spoilers Off. You Have Been Warned.
Advertisement:
open/close all folders
Season 9

201 - "King of the Hill"note Not to be confused with the Western Animation show of the same name.

B - The Terror of Tiny Toon

Homer: I never thought I'd say this about a TV show, but... this is kind of stupid.

Saleswoman: Thinking of saying goodbye to gas?
Bart: You betcha. (burps)
Marge: Bart! (farts) Well, that shut me up.

A - I Know What You Diddily-Iddily-Did

One of the most incoherent episodes of season 11, but also one of the funniest:

[Homer fondly looks at a piece of the set with a chunk bitten out of it.]Bart: TV families were always hugging and tackling issues.
Marge: Homer kept saying he could do a more realistic family show. Finally I said, "So do it. Either [bleep] or get off the pot."
Narrator: And [bleep] he did.
Season 12

B - Scary Tales Can Come True

C - Night Of The Dolphin

A - Hex and the City

B - House of Whacks

A - D'oh Brother, Where Art Thou? (Homer's Odyssey)

Flanders: Now throughout history, when people get wood, they'll think of Trojans!
Homer: (laughing) Trojans.
Lisa: What are you laughing at, dad?
Homer: If I'm laughing at what I think I am, it's very funny.

B - The Fright To Creep and Scare Harms

C - The Island of Dr. Hibbert

C - Stop the World, I Want to Goof Off

321 - "Marge vs. Singles, Seniors, Childless Couples and Teens, and Gays"

B - Lewis and Clark and Sacajawea

B - Four Beheadings And A Funeral

C - In The Belly Of The Boss

345 - "There's Something About Marrying"