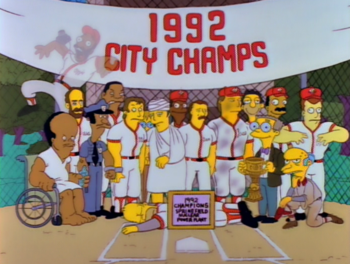 Marge: “Well...I guess [Homer] will be happy when he comes to."
Moments pages are Spoilers Off. You Have Been Warned.
Advertisement:
open/close all folders
Season 1

1. - "Simpsons Roasting on an Open Fire"

16. - "Treehouse of Horror"note A.K.A. "The Simpsons Halloween Special"

B. - Hungry are the Damned

17. - "Two Cars in Every Garage and Three Eyes on Every Fish"

42. - "Treehouse of Horror II"note A.K.A. "The Simpsons Halloween Special II"

46. - "Burns Verkaufen der Kraftwerk"note In English, it inaccurately translates to "Burns Sells the Power Plant". The actual translation is close but grammatically incorrect: "Burns to Sell the Power Plant". Also, just to be a Grammar Nazi, it should be das Kraftwerk.