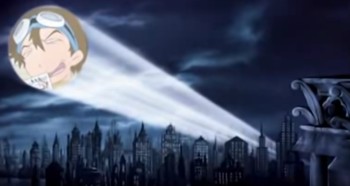 open/close all folders
Santa Claus: The Movie
Star Trek: The Motion Picture
Star Trek III: The Search for Spock
Advertisement:
Star Trek V: The Final Frontier
Star Trek: Generations
Star Trek: Insurrection
Patch Adams
200th Episode: Ponyo
Advertisement:
Dunston Checks In
Thomas and the Magic Railroad
The Top 11 Nostalgia Critic F***-Ups Part 3
Richie Rich
Jungle 2 Jungle
Old vs. New: Red Dragon
Star Chaser: The Legend of Orin
Raiders of the Story Arc: Transformers
A Simple Wish
Alien Resurrection
Critic/Other Guy: You know, I don't think that fall would've killed him—
Critic: Nah, he's dead.
Critic/Other Guy: [beat] There's no other aliens down there to get him—
Critic: No no, he's dead.
Critic/Other Guy: [beat] He could easily just swim out of there any chance he wanted—
Critic: Why can't you just accept the INCREDIBLY RARE FACT that a black guy has died in a horror film?!
Critic/Other Guy: [beat] Even all the facehuggers were destroyed—
Critic: You racist?!
Critic/Other Guy: How does that even—?! [gives up] Sure.(Chestburster kills him)Chestburster: ♪Hello my baby, hello my honey!♪
Jack
Heavy Metal
-.->"If I could, I would even throw a commercial interuption in the middle of these stori-" (Screen is briefly in black, and if you're watching it on blip, there really is a commerical break) "Well, that was lucky."
Mr. Magoo
Top 11 Simpsons Episodes
Signs
Digimon: The Movie
Note: for the sake of readability, since this predated Jacob Chapman (formerly known as Hope Chapman) coming out as transgender, the examples will refer to him as "her", since he was a girl at the time of doing the review, and some of the jokes are obviously written around this fact.
Top 11 F*** YEAH Movie Themes
Superbabies: Baby Geniuses 2
Indiana Jones and the Temple of Doom
The Wiz
Total Recall
Scooby-Doo