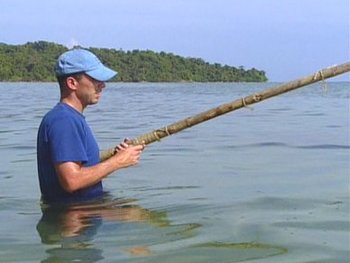 Unfortunately, Sean's superpole 2000 failed to catch anything. The ocean must have been overfished.

All-Stars
Vanuatu
Palau
Guatemala
Panama - Exile Island
Cook Islands
Fiji
China
Micronesia - Fans vs. Favorites
Gabon
Tocantins
Samoa
Heroes vs. Villains
Nicaragua
Redemption Island
South Pacific
One World
Philippines
Caramoan - Fans vs. Favorites
Blood vs. Water
Cagayan
San Juan Del Sur
Worlds Apart
Cambodia - Second Chance
Kaôh Rōng
Millennials vs. Gen X
Game Changers
Heroes vs. Healers vs. Hustlers
Pre-SeasonEpisode 1: "I'm Not Crazy, I'm Confident"Episode 2: "I'm a Wild Banshee"Episode 3: "My Kisses Are Very Private"Episode 4: "I Don't Like Having Snakes Around"Episode 5: "The Past Will Eat You Alive"Episode 6: "This Is Why You Play Survivor"Episode 7: "Get to Gettin'"Episode 8: "Playing with the Devil / Knights of the Round Table"Episode 9: "Fear of the Unknown"Episode 10/11: "Buy One, Get One Free"Episode 12: "Not Going to Roll Over and Die"Episode 13: "The Survivor Devil"Episode 14: "Million Dollar Night" (Finale)Reunion
Ghost Island
Episode 1: Can You Reverse The Curse? Episode 2: Only Time Will Tell Episode 3: Trust Your Gut Episode 4: Diamond in the Rough Episode 5: Fate Is the Homie Episode 6: Gotta Risk It For the Biscuit Episode 7: Fear Keeps You Sharp Episode 8: The Sea Slug Slugger Episode 9: It's Like the Perfect Crime Episode 10: The Finish Line Is In Sight Episode 11: A Giant Game of Bumper Cars Episode 12: Always Be Moving Episode 13: It Is Game Time, Kids
David vs. Goliath
Episode 1: Appearances are Deceiving Episode 2: The Chicken Has Flown the Coop Episode 3: I Am Goliath Strong Episode 4: Time to Bring About the Charmpocalypse Episode 5: Jackets And Eggs Episode 6: Aren't Brochachos Just Adorable? Episode 7: There's Gonna Be Tears Shed Episode 8: You Get What You Give Episode 9: Breadth-First Search Episode 10/11: Tribal Lines Are Blurred Episode 12: So Smart, They're Dumb Episode 13: Are You Feeling Lucky? Episode 14: With Great Power Comes Great Responsibility
Edge of Extinction
Island of the Idols
Winners at War