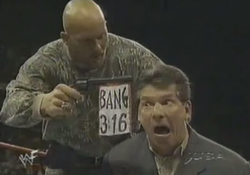 McMahon 3:16 says I just pissed my pants!
"Austin 3:16" might mean that Stone Cold just whipped your ass, but as evidenced by the moments below, it could very well also mean that he's just made you laugh your ass off.