Funny / Some Jerk with a Camera 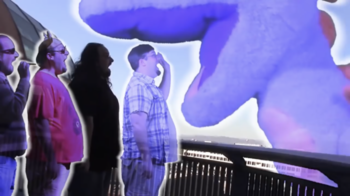 WARNING: This is gonna be a long read.

Back to the Future: The Ride
The Simpsons Ride
Shrek 4 D
Escape from Tomorrow
The Haunted Mansion
Harry Potter at Universal Studios Hollywood

The Book of Pooh - Day of the Knights/Come As Eeyore

Read It and Weep

Doug Episode 21: Quailman vs. The Triad of Terror

The Little Mermaid: The Series (series) S3E3 - Island of Fear

While You Were Sleeping

Mickey's Once Upon a Christmas

The Adventures of Huck Finn

The Cat from Outer Space

Dinosaurs - S1E8 I Never Ate For My Father

Prince of Persia: The Sands of Time

BONUS MINISODE! State of the Parks: Galactic Starcruiser costs HOW much?