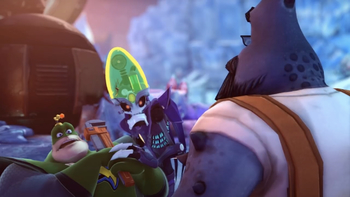 "If you fellas are done, I'm gonna need that wrench back."
Advertisement:

Ratchet, Clank, Captain Qwark and Dr. Nefarious need to team up to find a way home and beat the latest bad guy. Need we say more?