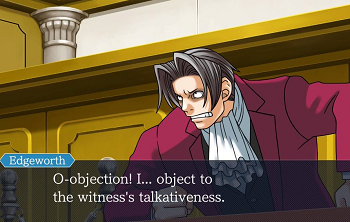 This page covers the first game. Take material concerning Justice for All, Trials and Tribulations, Investigations, Apollo Justice, Dual Destinies, Spirit of Justice, The Great Ace Attorney, and the 2016 anime to the appropriate pages, please.
Advertisement:
open/close all folders