Spoilers Off is in full effect here, per wiki policy. Expect MASSIVE amounts of UNMARKED spoilers below. You Have Been Warned! 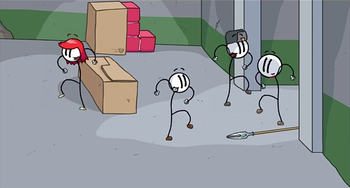 The series where it's almost as good, if not better to fail than to succeed, and here's why.

Breaking the Bank
Fails: Well, Failure Is the Only Option, after all...
Escaping the Prison
Lawyered Up/Legal/Lame Ending Route:

Stealing the Diamond
Intruder on a Scooter/Aggressive Ending Route: