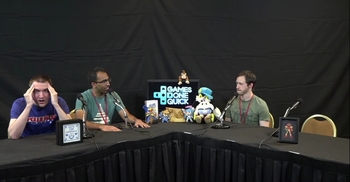 "Don't mind whoever this guy is, he's been frozen in shock since the end of your run."