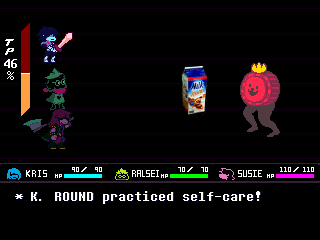 Because even if it results in a pretty jarring Art Shift, giant checkers pieces still need their calcium.
WARNING: Spoilers Off applies to Funny Moments pages.
Advertisement:
open/close all folders
Intro
Chapter 1
Chapter 2 Preview
No, Chapter 2 isn't out yet. What was shown on the sixth anniversary stream, however, is a barrel of laughs.
Hometown Epilogue
Advertisement:
Meta