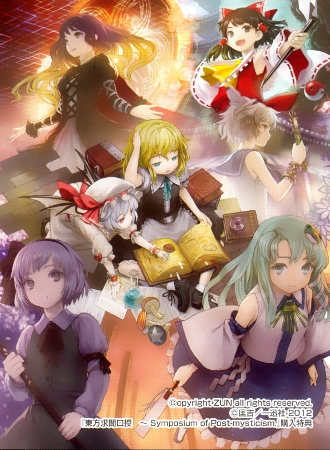 A few of the more important charactersnote Clockwise from top right: Reimu, Miko, Sanae, Youmu, Remilia, Byakuren. Center: Marisa. Not pictured: At least a hundred characters
Girls do their best now and are preparing. Please watch warmly until it is ready.
—Loading Screen
Advertisement:

Touhou Project ("Touhou", 東方, meaning Eastern or Oriental, pronounced "Toh Hoh", the same way as the film studio Toho), commonly referred to as just Touhou, is a series of doujin vertical-scrolling Shoot'em ups in the Bullet Hell and Cute 'em Up subgenres, developed by Team Shanghai Alice. It is most famous for its high difficulty level involving intricate bullet patterns, and that instead of having spaceships and warfare vehicles, it has girls in frilly dresses: nearly every character is a Little Miss Badass, Cute Monster Girl, or Cute Witch, and wears some degree of Lolita clothing. It's also outstanding in that despite the name "Team Shanghai Alice", the entirety of the main games, including the sprite graphics, 3D graphics, character portraits, dialogue, story, music composition, programming, bullet-patterns, and concept, are all done by one guy, known as "ZUN."

note His real name is Jun'ya Ota. Some fans call him Kannushi (Head Priest), though.

The basic story of the setting is set in the land of Gensokyo, a Fantastic Nature Reserve hidden in the mountains of Japan, and the various humans, youkai, gods, and other mythological creatures living there. Created in response to the waning belief in such entities by modern humans and the advancement of technology, Gensokyo was (mostly) isolated from the outside world by a boundary of fantasy and common sense in the 1800s, creating a region where humans and youkai live in delicate balance to maintain co-existence. Although much of Gensokyo reflects an antiquated Japanese society, most games in the series take place in the real-life year of their release, with a steady continuity and the gradual introduction of more Outside World technology and concepts as the years go on.

Most main games in the series revolve around an "incident" that occurs, ranging from harmless curiosities like flying ships, to concerning events such as land-smothering mists, to threats to Gensokyo itself like otherworldly invasions. In any case, the duty of resolving said incidents falls onto the shoulders of main protagonist Miko Reimu Hakurei, her best friend Marisa Kirisame, and typically one or two other recurring characters per installment. After beating up several tangentially-involved bystanders in the early stages of each game, they eventually discover the person or parties responsible for the incident and trounce them and their friends or Battle Butlers; when all's said and done, many of them show up uninvited to drink tea or attend afterparties with the protagonists, and quite a few go on to become friends, acquaintances, or even playable allies in future games. Despite the dark insinuations of some characters' backstories and origins, and the stakes of some incidents, battles in-universe are more akin to fair-sportsmanship duels that prioritize beauty over efficiency, and the villains of most games run on White-and-Grey Morality.

Gameplay-wise, the main series games are vertical scrolling shooters divided into 6 stages, with a bonus Extra stage unlocked after beating the main game without continues. The games focus more on the bosses than the stages, with each stage boss of each game being a colorful character given their own musical theme and trademark bullet patterns, each distinct boss phase known both in-universe and out as a "spell card". The spell cards and the boss themes are also given fanciful names that hint at the character's backstory and personality. This steady accumulation of bosses is the source of the series' infamous amount of characters, while the spell cards and Leitmotifs keep them distinct enough to be memorable to the fans.

Besides this there are a number of Gaiden Gamesnote indicated with decimal numbering, e.g Touhou 10.5 including somewhat similar yet mechanically distinct shooters which don't fit the pattern above, Mascot Fighters, and an action game developed in collaboration with the doujin circle Twilight Frontier. Aside from generally being more dialogue-heavy than the main games, the fighting games are also known for their unconventional gameplay which adds in elements of Bullet Hell (think Mega Man: The Power Battle with Senko no Ronde bullet patternsnote Immaterial and Missing Power was released a year before Senko no Ronde), as well as strange mechanics which vary from game-to-game including Spell Card decks, unlimited Flight, weather effects and popularity meters.

In addition to the games, several non-game installments of The 'Verse have been printed over the years, including several canon manga and short story collections written by ZUN and authored by various mangaka. These print works tend to veer towards the Slice of Life or Mystery of the Week format, often providing a glimpse of normal life in Gensokyo, minor incidents and altercations between the various characters, the introduction of new characters (many of which later appear in the games in some form), or more information on the aftermath of the games' events. While they remain light in tone, these media make it more obvious that Gensokyo's long years of isolation, as well as being a place where the fantastic is commonplace and The Fair Folk outnumber humans, have given it an unusual culture that's prone to apparent Deliberate Values Dissonance on the surface. The accompanying stories of ZUN's Music Collection are especially notable for not being set in Gensokyo at all, but Kyoto in the near future.

Much of its popularity comes from its huge body of Fan Works, with tremendous numbers of not only amateur comics, but also fangames and arrangements/remixes of the games' music - in fact for many years, it has had the single largest fan-Doujin output of any franchise by a large margin. Indeed, while the series includes a large number of official supplementary material, its odd writing style means that many aspects of the setting are left vague - most characters can be interpreted in multiple ways or are given only a framework personality to begin with, exposition generally comes from sources that have reason to be biased or distort the truth, and even the artstyle of the games makes it hard to tell the body type of the character being depicted, creating a goldmine of Fanon interpretations. Perhaps most strikingly, series creator ZUN has given his blessing to the fans to release fanworks commercially, resulting in high-quality fangames being released on multiple platforms; despite the main series games having no official English translations, several fangames have even seen Western release.

See FanWorks.Touhou Project for a list of derivative works, including Fan Games, Fanfic, Fanime, music, Web Animation and Webcomics. See Seihou for the sister series, and Len'en for the non-fan work game series heavily inspired by both Touhou and Seihou.