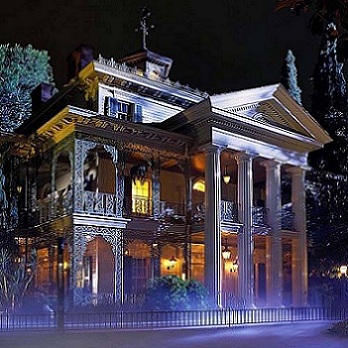 Welcome, foolish mortals.
"When hinges creak in doorless chambers,
When strange and frightening sounds echo through the halls,
Whenever candlelights flicker though the air is deathly still,
That is the time when ghosts are present,
Practicing their terror with ghoulish delight..."
—Opening lines

The Haunted Mansion is a franchise that has grown around the long-running attraction at the various Disney Theme Parks, which has gone on to spawn a comedy film with Eddie Murphy* as well as a more serious Guillermo del Toro project that wound up in Development Hell and an "in the works" (as of 2021) project from screenwriter Katie Dippold and director Justin Simien, a video game, three comic book series (a shortlived anthology series by Slave Labor Graphics, a miniseries at Marvel Comics under the Disney Kingdoms imprint, and a standalone graphic novel from IDW), and the Tales from the Haunted Mansion book series, in addition to appearances in various Disney media.

The actual rides includes examples of:

"There's a little matter I forgot to mention... Beware of Hitchhiking Ghosts!"

"Hurry baaaaack...hurry baaaaack...be sure to bring your death certificate, if you decide to join us. Make final arrangements now. We've been...dying to have you..."