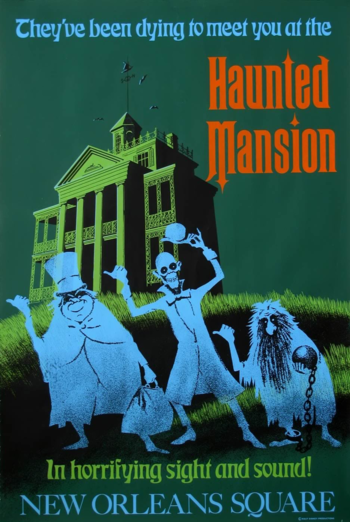 Welcome, foolish mortals.
"When hinges creak in doorless chambers,
When strange and frightening sounds echo through the halls,
Whenever candlelights flicker though the air is deathly still,
That is the time when ghosts are present,
Practicing their terror with ghoulish delight..."
—Opening lines
Advertisement:

The Haunted Mansion is a franchise that has grown around the long-running attraction at the various Disney Theme Parks.

"Kindly step all the way in, please, and make room for everyone. There's no turning back now..."

"Hurry baaaaack...hurry baaaaack...be sure to bring your death certificate, if you decide to join us. Make final arrangements now. We've been...dying to have you..."
Feedback