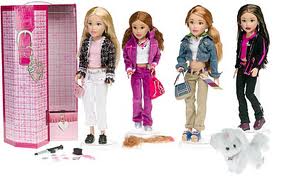 Teen Trends is a line of dolls created by Mattel. They featured only four dolls and were released in 2005. They have most likely been discontinued, but their official website is still up. Nothing new has been released since 2007. It is unknown if they will ever release anything new again, but during the holiday shopping season of 2007 super sized Kianna dolls were being sold at Costco. That is the most recent thing to be released in Teen Trends as of 2012.