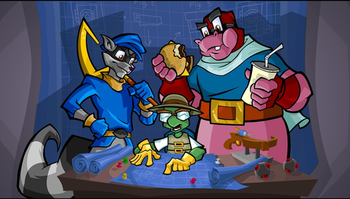 The gang prepares for a heist. note From left: Sly, Bentley and Murray.
"There's no honor, no challenge, no fun in stealing from ordinary people. You rip off a master criminal, then you know you're a master thief."
— Sly Cooper
Advertisement:

Sly Cooper is a series of 3D platformers published by Sony Computer Entertainment and developed by Sucker Punch. The only slightly lesser-known member of the PlayStation 2's trio of Mascots, along with Jak and Ratchet.

Set in a World of Funny Animals, that takes pains to resemble a Saturday Morning Cartoon, the games in the Sly franchise tell the tale of the world's greatest, yet most honorable, thief. The Cooper family (all raccoons) have been thieves for generations, extending back to prehistory if the stories are to be believed. Sly, the latest in the line, is orphaned as a child when rivals show up at his father's home to finish him off. In the orphanage, he picks up two lifelong compatriots, genius Bentley (a turtle) and super-strong Murray (a hippo). They grow up, and set off into the world to honor the Cooper legacy, mostly by robbing other criminals blind (There's no honor, no challenge, and no fun in taking from good people; taking from thieves is a real test).

The gang is pursued by Carmelita Fox (a fox, naturally), Interpol inspector and primary love interest. As with Zenigata in Lupin III, Sly normally sets the bad guy he's up against to be arrested by Carmelita after he's done with them, while he escapes. note That little allusion should indicate just what Carmelita's role is. Well, aside from being Fanservice and the Love Interest.

A fifth game was teased at the end of Thieves in Time, but never came about. Sanzaru Games, creators of Thieves in Time, have expressed interest in continuing the series, but have confirmed that it's up to Sony whether or not another Sly game will be made. However, with Sanzaru now an Oculus subsidiary and Sucker Punch having moved on to new projects, the series' future remains unknown at this point.

The gameplay in all of the titles is fairly consistent. Sly has incredible jumping and climbing ability, and can move silently for stealthy knock outs. Most missions involve getting to somewhere, fighting some guards, doing a minigame puzzle, and getting out again. In the second game, Murray and Bentley are playable, with an even bigger cast in the third, including some missions played as Carmelita (the gang tricks her into helping them out).

A pair of two promotional comics created by Sucker Punch Productions called The Adventures of Sly Cooper was published by GamePro Magazine and DC Comics in 2004 and 2005.

In 2005, a short-lived manga was distributed in the Japan-only Comic BomBom magazine to promote the Japanese release of the second game, and can be read about here

. Sly (and Bentley) also teamed up with Ratchet & Clank and Jak and Daxter in the three-way crossover PlayStation Move Heroes, and Sly is also a playable character in the Mascot Fighter Playstation All Stars Battle Royale. A film was also confirmed in 2014, but was cancelled as Ratchet & Clank (2016) was a Box Office Bomb. However, a CG-animated television series was announced in its place

. It was set for an October 2019 release, but has not aired and is believed to be in Development Hell.

As a video game stylized after a cartoon, it draws heavily on Animation Tropes and Video Game Tropes.

Jump and hit the circle button to ruin your life.