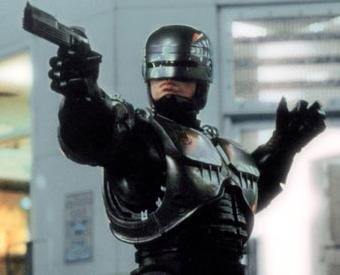 RoboCop is a Cyberpunk film, TV, comic and video game franchise. Set in an eerily-prescient version of Detroit, the over-burdened and under-staffed police force is privatized and given to Omni Consumer Products (OCP), who effectively own the city. OCP builds a cyborg from the remains of Officer Alex Murphy, a hero cop who was murdered in the line of duty. Armed with bulletproof armor, an impossibly-steady hand, and a computerized brain, RoboCop is touted as "the future of law enforcement" and dispatched to the warzone of "Old Detroit". But he is ultimately a tool for public-relations, and the soul of Murphy remains restless.

It all got its start with the film RoboCop (1987), directed by Paul Verhoeven. What was originally thought to be a B-Movie flick became a smash hit as a gritty, ultra-violent, darkly humorous film which featured a great deal of social commentary and political satire on such subjects as capitalism, privatization, the environment, and public apathy. It also has a rich undertone similar to the Golem of Jewish folklore, an ensouled artificial creation who is a mere shadow of a man. The film worked as pure summer entertainment as well, with taut action sequences, impressive production design, and memorable characters. Its smash success spawned a series of sequels and spin-offs while providing a huge shot in the arm for the Super Hero film genre that the box-office failure of Superman IV: The Quest for Peace almost sunk in the same year.

The first sequel, RoboCop 2 (1990), was even more violent and edgier than the first, going so far as to include a child as one of the primary villains. Relying too heavily on raw violence and shock value while having less of the satirical humor that defined its predecessor, the sequel was not as popular as the original film. Frank Miller wrote the original screenplay; although the script was heavily altered to fit a movie format, his influence in the themes of the film can be identified, including scenes in which a focus group attempts to make RoboCop more family-friendly (rendering him unable to do his job). Avatar Press later turned his original vision of the film into a comic book series, Frank Miller's RoboCop.

There was also a series of video games produced for home consoles and the arcade, mostly adhering to what is now referred to as the "run and gun" format. note The ZX Spectrum version is recognised as one of the most successful — and Nintendo Hard — games on that system.

"Thank you for your cooperation. Good night."
Feedback