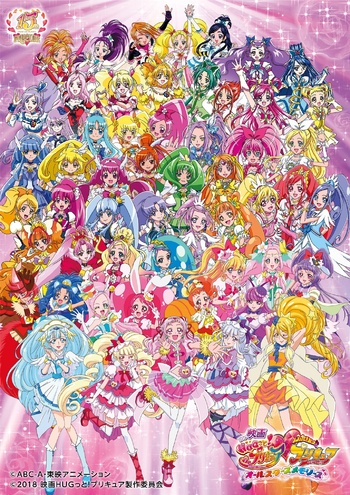 Beating evil into the ground with rainbows and kicks since 2004.

This is a Cash Cow Franchise metaseries created Anime First by Toei Animation and spanning many an Alternate Continuity. The basic formula is as follows: first, a parallel world of fairies is attacked and conquered by an evil invading force. As a last resort, this world sends one or more fairy representatives to Present Day Earth, a place which holds a MacGuffin that the evil force needs next. There, the fairies bestow their magical power upon a number of ordinary school girls, who must then Save Both Worlds when the evil force arrives.

The series distinguishes itself from other Magical Girl series in the high quantity of physical fighting and Postmodernism included, and through the dynamic of having two central main characters who can only transform and use their most powerful abilities in tandem. The series focuses heavily on The Power of Friendship and the Character Development between the lead characters.

The various seasons are:

, teaming up characters from all series, as well as a short film and a video game that do the same. Most seasons have at least one movie that makes no canonical sense (most of the time) but can't be thrown out because of something really awesome happening in it. Then there's a manga for each series, going into depth in various ignored aspects, like Rin's crush on Nuts and Saki's little sister's life.

The Franchise seems to have very good relations with Tokusatsu: it's produced by Toei, which also produces Super Sentai and Kamen Ridernote In fact, one of the Kamen Rider's actor said it will be cool if a crossover between both franchises could happen someday, albeit he knows that putting a live-action series along with an animated one could be difficult, and the three franchises are aired back to back in the appropriately named Super Hero Time block. The Pretty Cure and Super Sentai movies have been played as double bills, and Nagisa and Honoka teamed up with Tokusou Sentai Dekaranger characters in an audio drama, and later with Mahou Sentai Magiranger. Gundam has a less than amiable relation with Pretty Cure as those who had a role in Gundam went on to play villains for Pretty Cure.note The exceptions are Rie Tanaka, who played Hikari Kujou/Shiny Luminous about a year after playing Lacus Clyne and Naoko Matsui, better known for her roles as Roux Louka and Dorothy, who took up the role of the mascot Ribbon, Yu Shimamura, who was still playing Aida Surugan when taking up the role of Haruka Haruno/Cure Flora, Mikako Komatsu, who played Sei Iori before taking the role of Madoka Kaguya/Cure Selene and Hiroyuki Yoshino, who played H/Allelujah Haptism before playing the fairy Prunce. Also, one of the halves of the original duo, Yoko Honna (Nagisa Misumi/Cure Black) would took up the role of Sumeragi Lee Noriega years after the original Precure ended. The other half of the original duo, Yukana (Yukishiro Honoka/Cure White), became the new voice actress for Four Murasame. Ironically, as much as the Toku relationship was smooth, it also has some sort of reverse effect with the Gundam series, that those who once voiced Precures has a chance to end up voicing (mostly) female Toku villains and monsters of the week (usually from Super Sentai). note Case in points: Aya Hisakawa (Yuri Tsukikage/Cure Moonlight/Madame Noir), Kanae Oki (Love Momozono/Poison Arrow Ninja Suzumebachi), Megumi Han (Hime Shirayuki/Cure Princess) Izayoi Kyuuemon, Minako Kotobuki (Rikka Hishikawa/Cure Diamond/Nalia, Eri Kitamura (Cure Berry and Madako), and most recently Karen Miyama (Usami Ichika/Gaeru Magia). This has retroactively inverted in one way with Marina Inoue, who first voiced Metal Alice and then went on to voice Nao Midorikawa/Cure March, and Haruka Tomatsu, first voicing Candelila and then went to voice Iona Hikawa/Cure Fortune. There are aversions like Aoi Yuuki, who will voice Nodoka Hanadera who previously portrayed the younger Mari Sonoda and later voiced Yurusen. Another way to invert this is a Sentai protagonistic character actor to voice villains in the Precure series, as seen with Takayuki Godai (playing Takayuki Hiba/Vul Eagle II and Hakumenrou) voicing Akudaikahn; Eiji Maruyama (Daizyujin) voicing Bloody; Hikaru Midorikawa (Bakuryu TopGaler) voicing Dune; Tessho Genda (Gorisaki Banana) voicing Pierrot; Yuuichi Nakamura (Beet J. Stag) voicing Kushe; Hisao Egawa (Buson) voicing Glaive and most recently Yukari Tamura (Navi) voicing Ruru and Louis Yamada LIII (Professor Amachi) voicing Takumi

The franchise is also known as Precure. While this is technically a more accurate transliteration of the title logo (which reads "purikyua") and appears in URLs and such, said logo (as well as much of the truly astonishing amount of merchandise) also explicitly spells out the title as "PRETTY CURE"… at least until HeartCatch Pretty Cure! and subsequent series, which say "PRECURE" instead.(Incidentially, Yes! Pretty Cure 5 has no caption). The pronunciations purikyua and puritii kyua are used interchangeably, both in theme songs ("1, 2, 3, 4, Purikyua 5! Puritii, kyu, kyu, kyu, kyua…") and in-universe (including one odd instance of a character hearing the name for the first time as purikyua and immediately questioning "Puritiikyua?"). There are two ways to deal with this: one is to directly translate, taking "Precure" as a commonly used short form and "Pretty Cure" as their less-used full title, and the other, used by both fansubs and the first season's official subs, is to use "Pretty Cure" for both. TV Tropes does the latter for reasons completely unrelated to "Pretty Cure" making a good Wiki Word.

Saban Brands attempted to do what they did for both Digimon and the Power Rangers (Super Sentai) and licensed the franchise for the west in late-2015, first dubbing Smile and rebranding the series as Glitter Force with the show being released on Netflix as a Netflix Original in 2016. They would later dub DokiDoki! the next year and release it as Glitter Force DokiDoki!. However, Saban Brands would eventually sell their assets to Hasbro and close down, with the franchise's international rights returning to Toei. It's unknown if Toei or Hasbro will continue the Glitter Force brand after DokiDoki!. This seems unlikely as, on June 23, 2020, Crunchyroll revealed they were going to stream Healin' Good as part of their Summer 2020 anime lineup, thus bringing the franchise Stateside proper.

And in case you're wondering: yes, it's a Pun-Based Title. "Purikura", short for "Print Club", is the name given to those photo booths in Japan that print out stickers with your photo on them. note The word "photo booth" is written in Japanese as プリクラ, whereas "Pretty Cure" is プリキュア This is never brought up in the show, save for three fairies in the first continuity (the Elder, Pollun and Lulun) constantly calling Pretty Cure "Purikura", nor does it have any significance.

Statler: So what's that Pretty Cure no one has ever heard of?
Waldorf: Well, those girls are pretty enough to cure my boredom!
Both: Do-ho-ho-ho-hoh!