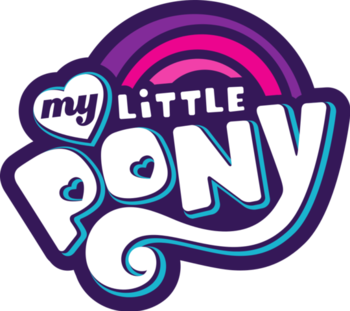 The fourth incarnation of the long-running My Little Pony franchise, officially known as the Friendship Is Magic or Equestria Universe of My Little Pony.

Collectors unofficially refer to this incarnation of the My Little Pony franchise as "G4", which began with the airing of the cartoon series My Little Pony: Friendship Is Magic developed by Lauren Faust, debuting in October of 2010. The series became a surprise smash hit, gaining a huge Periphery Demographic online fandom. At its core Friendship is Magic has the fantasy & adventure elements of "G1", Slice of Life stories started by Tales, and much of the cast are re-imagined "G3" ponies.

You can read more about the series on its own page.

Hasbro, being at first surprised at the rise of the Bronies and then delighted at the outstanding success of the series, has started to give FiM the full Merchandise-Driven treatment, giving it its own Expanded Universe, ranging from a series of comics published by IDW Publishing, several chapter and picture books, a mobile game, and even an alternative film series where the ponies are humanized. Most FiM stories take place in the magical land of Equestria, a Fantasy Kitchen Sink, and usually revolve around the six "mane" characters: Twilight Sparkle, Applejack, Rarity, Rainbow Dash, Pinkie Pie, and Fluttershy. There are, of course, many more ponies (and a lot of non-ponies) than that. As the subtitle of the cartoon series suggests, there's a strong emphasis on teaching The Power of Friendship, from how it enriches everyday lives to how it can defeat the ancient forces of evil with rainbow lasers.

Hasbro announced in February 2019 that the franchise would be rebooted once again with Friendship is Magic concluding in its ninth season. The fifth incarnation, tentatively known as Generation Five, launched in 2021 with My Little Pony: A New Generation, a 3D CGI animated movie co-produced by Paramount and Boulder Media and released by Netflix. The movie, alongside subsequent material, is set in the same world as Generation Four, albeit set some time after the events of ''Friendship is Magic''

The main series eventually wrapped up in October 12, 2019, Discovery Family showing a full day of the season 9 episodes before ending in the three part finale (at prime time no less). With this, it became, perhaps fittingly, the last of The Hub's original programming to end.

Tropes that apply to My Little Pony: Friendship is Magic in general