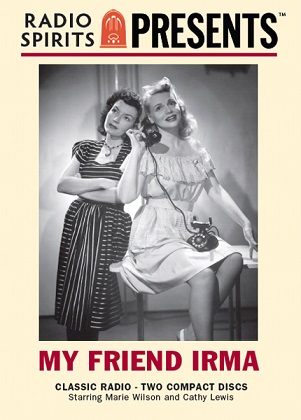 My Friend Irma may be the most famous franchise most people have never heard of. It was one of the biggest hits of the Golden Age of Radio, was one of the earliest television hits, released two feature films that introduced Dean Martin and Jerry Lewis to moviegoers and produced a successful comic book that was written by Stan Lee and drawn by Dan DeCarlo. Perhaps most lastingly it was the Trope Codifier for the image of the beautiful but empty headed blonde.

The series began life as a radio sitcom in 1947. Irma Peterson (played by Marie Wilson in the radio series and all live action appearances), a clueless but pretty and sweet hearted stenographer tried to survive life in New York with the help of her best friend and roomate, Brainy Brunette Jane (played by Cathy Lewis on radio and Diana Lynn in the movies). Together the duo got into various misadventures with their respective boyfriends Al and Richard. Each episode was introduced by Jane narrating about whatever disaster Irma had gotten herself/herself and Jane/everyone into this week.

The show was a huge success thanks especially to Marie Wilson, whose natural charm and comic timing turned the potentionally irritating Irma into a lovable airhead. Spin-offs quickly followed with Wilson's real life good looks making the character viable on the big and small screen, first appearing in a film (My Friend Irma) in 1949 followed by My Friend Irma Goes West in 1950. Marvel Comics introduced a comic book based on the series in 1950 and the same year a Newspaper Comic started appearing. The radio and television series both ran until 1954 while the comic book ran until 1955.

Many episodes of the radio show still survive and can be found easily, as can the original comics. The two films have been released on DVD but sadly the television series is nearly entirely lost, having been filmed live.

and a couple of surviving TV episodes here

Incidentally, this got a Shout-Out by Anna Russell in her "The Ring of the Nibelungs (An Analysis)".