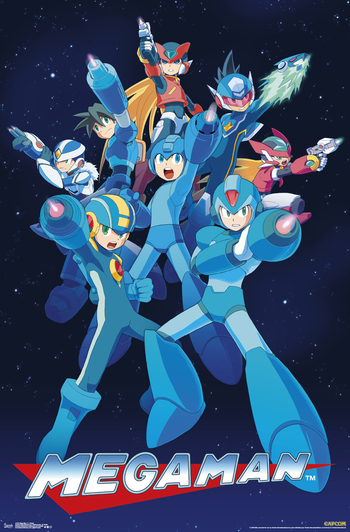 If you were looking for the first game, the one that launched this franchise, see Mega Man. For the original series, nicknamed the "classic" series, see Mega Man (Classic).

Mega Man is an insanely popular and long-running video game franchise created by Capcom in the 1980s. Known as "Rockman" in Japanese.

There are actually a bunch of different series that share the name (in chronological order):

All of these series have the same basic style of gameplay (Mega Man moves through a level, defeating a boss at the end and gaining a new weapon), but the first three series are more Platformers, Legends is a cross between a Third-Person Shooter and an Adventure Game, Battle Network and Star Force are RPGs with a very unique combat system, and Online would have been a 2½D side-scrolling action RPG. Each game has its own unique gameplay elements. Additionally, Mega Man characters have a tendency to show up in the Capcom vs. titles which tend to be fighting games with some rare exceptions.

There are also a number of mobile device spin-offs

, varying in complexity and quality. Many are puzzle games, but there are a few exceptions like Rockman GO GO! (2015), an Endless Running Game featuring the cast of Powered Up. Another one is Rockman Xover (2012, pronounced "Crossover"), a Crisis Crossover RPG game for mobile devices, designed to celebrate Mega Man's 25th anniversary. Capcom pulled the plug after the game's poor performance, however, and the Western release was cancelled before its eventual discontinuation. 2020 brought Rockman X DiVE, a 2D action platformer developed by Capcom Taiwan, with a global release as MegaMan X DiVE in 2021; it is the first mobile game, not counting ports of main series games, to be released outside of Asia.

It should be noted that the various series could be Alternate Universes of one another. While there are still numerous hints that they are connected (except for Battle Network, which is definitely an Alternate Universe), there are also discrepancies.

On December 17, 2012, Capcom released Street Fighter X Mega Man as a Freeware game. Get it here!

There have been several TV shows based on the games — Ruby-Spears first created a cartoon based on the Classic series, simply named Mega Man (1994). Mega Man was also featured as part of the heroic ensemble in Captain N: The Game Master (1989), although he was presented as having a Verbal Tic, saying random words with the prefix "mega-". Meanwhile, Japan's Ashi Productions made their own animated adaptation, resulting in a limited-release OVA called Mega Man: Upon a Star (1994). Despite featuring the cast from the Classic series, this one's presented as an edutainment cartoon about the Japanese culture.

Battle Network and Star Force were planned with merchandising in mind from the beginning, thus they got long-running animated series, along with other supplementary materials. The Battle Network anime was localized in English as MegaMan NT Warrior (2002), while the Star Force one retained its name, though the latter received the English dub only for some of the first season. Most recently, Man of Action Studios produced another cartoon inspired by the Classic series named Mega Man: Fully Charged (2018). Outside of borrowing some features from the series, it establishes its own continuity instead and has its own cast of humans and robots.

Various artists collaborated with Capcom to create a number of mangas and manhuas for the series, but the most famous one is Mega Man Megamix by Hitoshi Ariga. Megamix made its way into the US courtesy of Udon Entertainment. An American comic book series by Archie Comics, named simply Mega Man, was released in spring 2011, which eventually lead to a crossover with their Sonic the Hedgehog comics in Sonic the Hedgehog/Mega Man: Worlds Collide, followed by another, larger crossover in Sonic the Hedgehog/Mega Man: Worlds Unite that sadly killed off both comics. An earlier American comic by Dreamwave was short-lived. Brazil had its own grim yet off-beat take on the character. And Fully Charged had its own comic adaption after its conclusion.

Mega Man The Board Game was funded

through Kickstarter by Jasco Games.

On September 2, 2015, The Tracking Board announced

that 20th Century Fox had secured the rights to do a Mega Man feature film, reports that Capcom subsequently confirmed several years later in October 2018. Henry Joost and Ariel Schulman of Catfish are in talks to write and direct this one. However the project has been indefinitely shelved due to the Fox merger with Disney.

On April 28, 2021, two online gag manga series were released simultaneously. Rockman Chan is a Denser and Wackier series featuring an "innocent" Mega Man trying to keep up with Dr. Light's ridiculous demands. Rockman-san is instead a Darker and Edgier series that takes place after the retirement of Dr. Light following Dr. Wily's abandonment of his evil ways, leaving Rock and Roll to grow as adults running a dentistry together while the other Robot Masters begin to take up their intended jobs or other avenues. However, robotkind starts to clash against the humans following conflicts over the industry and workforce, and a new threat begins to crack the new age of peace...

Given that the series is among the most popular of Capcom's stable, several Mega Man characters have crossed over with other Capcom properties.