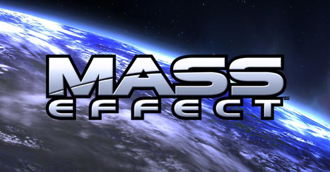 The amount of tropes is certainly massive.
In the year 2148, explorers on Mars discovered the remains of an ancient spacefaring civilization.
In the decades that followed, these mysterious artifacts revealed startling new technologies, enabling travel to the furthest stars.
The basis for this incredible technology was a force that controlled the very fabric of space and time.
They called it the greatest discovery in human history.
The civilizations of the galaxy call it...
MASS EFFECT
Advertisement:

The series takes place in the late 22nd century. A few decades ago, Mars turned out to have an outpost of the franchise's Precursors, the "Protheans," which yielded up advanced technology, including "element zero," a substance that can be used to alter the mass of anything near it. By utilizing this "mass effect," mankind was able to develop fancy new technologies like personal Deflector Shields, Faster-Than-Light Travel and Artificial Gravity. Amongst the stars, humans found themselves to be just one sentient species amongst an entire panoply of civilization: the mono-gendered asari, the amphibian-descended salarians, the militant turians, the hard-to-hurt krogan, and more.

There have been four main titles in the series:

The series makes heavy use of a large number of science fiction tropes. Nearly every aspect of the setting has been thoroughly thought out, with hefty amounts of technical, cultural, and historical background data provided by an Encyclopedia Exposita. (Amongst other things, the names of alien races are not capitalized—the way "human" isn't.) It manages to be simultaneously a reconstruction of the Space Opera, a highly plausible setting, and a Lovecraft Lite Cosmic Horror Story in the form of the Reapers.

Shepard, in true BioWare fashion, is customizable across the board, from gender to family background to previous military experience. The sequels allow you to transfer your personal Shepard, with the same appearance, background and choices. The Ryders are somewhat less customizable — they will always be fraternal twins, so the player cannot change their gender, and their first name is no longer selectable — but everything else is available for tweaking; in fact, the two do not even have to look like each other, and the game dynamically alters the appearance of their parents, Alec and Ellen Ryder, to reflect your choices.

The franchise is primarily a RPG, with third person shooter combat. The games combine the regenerating shields and integrated vehicle sections of Halo, the stop-and-pop cover mechanics of Gears of War and Wide-Open Sandbox exploration elements as you fly around the galaxy in your Cool Starship, the Normandy. Shooting took on a completely new dimension in the first game, however, as firearms had Bottomless Magazines (justified in-story) and were instead limited by refire rate; firing them too fast would result in Overheating and a mandatory cooldown period. The remaining games in the series have returned to a much more traditional firearms experience. RPG elements are present in the form of a Class and Level System for you and your party members, in addition to new guns and armor, while outside of combat you are able to influence the story in a lot of ways, and even transfer your story decisions to the next game. Gameplay elements, and their revisions for the sequels, saw a mixed reception.

The classes presented to you are divided up between three affinities: Combat, Tech and Biotic. Combat classes have abilities based on amplifying their weapons, armor and own reflexes to make them deal and receive loads of damage. Tech classes counter the opponents' technology (jamming their weapons, overloading their shields, sending out attack drones) and hacking mecha mooks to attack their own. Biotic classes project the eponymous mass effect with their own bodies, giving them Mind over Matter powers that are based on warping space and gravity, creating area-effect burn damage and providing biotic barriers. Shepard can choose one of three specialized classes for maximum effectiveness in one style, or one of the three hybrid classes, sacrificing the full range of options and abilities of either class type for maximum flexibility. Your own team tends to be an eclectic mix of all three and you are only allowed to take two members with you on any given mission, so choosing which ones would be helpful for the circumstances is vital. Because gameplay evolved quite a bit over the course of the trilogy, it's hard to pin down just how the classes work, but here's a brief overview:

Like previous BioWare games, Mass Effect employs a karma meter with two moral endpoints. Rather than simply Good or Evil, however, the meter essentially measures the player's place on the Sliding Scale of Idealism Versus Cynicism; Paragon choices move toward idealism and Renegade choices toward cynicism. Most responses tend to be either nice or mean ways of saying the same thing ("I'm sorry, but please tell me what happened" versus "Get over it and tell me what happened"), but as you climb each meter, you unlock new conversation options which can take things in a completely different direction ("I'm an Action Survivor too. You Are Not Alone!"; "Get a Hold of Yourself, Man!! Quit Your Whining!"). These options also allow your character to influence people via their charisma or their intimidation factor, reflecting on the growing impact you are having on the galaxy.

The story largely remains the same regardless of the choices that you make but the multiple methods of how Shepard works through any given scenario is carefully monitored between the games, which creates a more enriching experience as your particular choices resonate throughout the story and across the games. The railroading on dialogue choices may not allow complete freedom of choice but it helps hold the plot together: whether you choose to play Shepard nice or mean, s/he is still a hero either way.

These choices are omnipresent, as every conversation in the game is interactive and most give a chance to score Paragon and Renegade points. Yes, Paragon and Renegade: you can climb both sides of the scale simultaneously. Instead of each choice pulling you in one direction or another, there are separate meters for Paragon and Renegade, and choosing towards one does not change your position on the other. This allows much more complex characterization; there's no reason you can't play (say) a moral xenophobe who is Paragon towards humans but Renegade towards aliens, a True Neutral character who adapts to fit each situation, or even alternate every time you're given a choice. Of course, there are benefits to committing to either end; in every game but the last, there are dialogue options and even missions you can't access at all unless you have a high Paragon/Renegade score (the third unlocks options based on your total Karma Points, and adds non-flavored "Reputation" points as well). And in terms of replay value, it's kind of brilliant, since no matter what path you choose, there's always at least one other branch (sometimes more) you consciously turned away from.

And these link up with the other theme of the franchise: Continuity Porn, the Choice-and-Consequence System and the Old Save Bonus. There are plenty of NPCs you can interact with, and depending on your choices they could even die over the course of the game. If they don't, they will almost certainly appear in the next game (where, possibly, they can be killed this round). Mass Effect has hundreds of named characters, and the list of ones who don't re-appear in the next game is a lot shorter than the list of those who do; this creates a sense of not only a living, breathing universe, but the feeling that you, Commander Shepard, have some significance, some — well — mass effect on it. And these are just the casual choices — what about the ones where you decide the fates of entire sentient species? Players of the franchise are known to run two or more saved games, playing and re-playing to see how their choices impact the galaxy.

In November 2020, Bioware announced that a new Mass Effect game was in development.

Mass Effect: Legendary Edition, a 4K remaster of the original trilogy containing all three games and almost all of their single player DLCnote Mass Effect 1's "Pinnacle Station" DLC is not included as its source code has been corrupted. was released on May 14, 2021 for PC, Xbox One, and PlayStation 4, with forward compatibility and enhancements for Xbox Series X and PlayStation 5.

In addition to the games, the series contains four prequel/interquel novels: Mass Effect: Revelation, Mass Effect: Ascension and Mass Effect: Retribution, written by Drew Karpyshyn, one of the writers for the games. As a result of Karpyshyn moving from working on Mass Effect to working on Star Wars: The Old Republic and subsequently leaving BioWare, the fourth novel, Mass Effect: Deception, was written by outside writer William C. Dietz. It was released on January 31, 2012.

A 4D motion simulator attraction based on the video games called Mass Effect: New Earth debuted at the California's Great America theme park in May 2016. The ride features characters from the original trilogy, with the voice actors reprising their roles, but does not take place canonically in the series.

that Amazon was seeking to adapt the franchise into a series for Prime Video, but it is not yet known if these plans will involve Shepard, the remaining crew of either Normandy, and the Ryder family or not.

The Mass Effect series as a whole contains the following tropes: