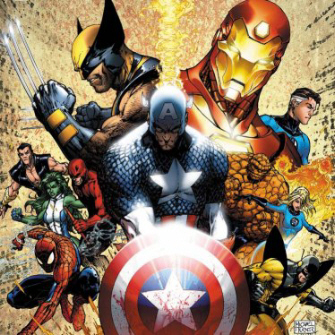 Not pictured: Beast, Blade, Doctor Strange, Ghost Rider, the Incredible Hulk, the Silver Surfer, Thor...
"None of this is really happening. There is a man. With a typewriter. This is all part of his crazy imagination."
— Deadpool

The world as portrayed in Marvel Comics, especially under Stan Lee, Steve Ditko and Jack Kirby, designated as Earth-616 in Marvel's multiverse. As in The DCU, Marvel heroes form teams and Crossover occurs frequently, with many Continuity Nods. (In fact, you could argue that Marvel invented the Continuity Nod.) Many of these comic books have been the basis for movies, TV series or both.

Many TV series and movies set in the Marvel Universe take place in and around New York. The original architects of the world put most of the heroes there, as a subversion of the then-dominant trope of No Communities Were Harmed and as an excuse for Cross Overs.