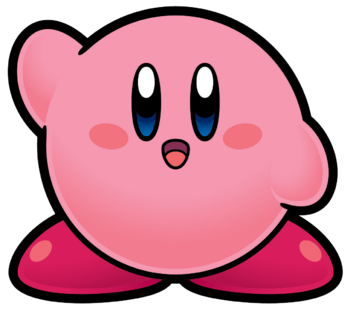 He's the super tuff pink puff!
"First you draw a circle,
Then you dot the eyes,
Add a great big smile
And presto, it's Kirby!"
— Intro to Kirby's Adventure
Advertisement:

Kirby is a multimedia franchise co-owned by Nintendo and HAL Laboratory and originally created by Masahiro Sakurai. The games star the titular Kirby, who is a young, pink, blobby, alien ...thingy. He can suck enemies into his mouth then swallow them, spit them out with incredible force, or — starting with the second game, Kirby's Adventure — absorb their powers after devouring them. He takes the old maxim "you are what you eat" quite literally. Throughout most of his adventures, he journeys across Dream Land, a fictional country on the distant Planet Popstar, to protect it from alien invaders and other threats to his home.

The Kirby games are typically designed to be easy for young (or beginner) gamers to complete, but to also provide some extra challenges for experienced players, with one of the earlier challenges being the Extra Game in the first game, Kirby's Dream Land, which adds more enemies to the stages and replaces some of the ones from the normal one with tougher ones.note This mode is unlocked with a button combination on the title screen (available from the start, but the button combination isn't displayed in-game until beating the game normally).

In development, Kirby's design was originally intended to be a mere placeholder for the Player Character. However, Sakurai grew attached to the Waddling Head, and decided to stray from the plan and keep him as the protagonist. He was initially known as Popopo, the star of Twinkle Popo, but this was wisely rechristened from a list of name candidates. It helped that the lawyer who defended Nintendo in an important lawsuit from Universal involving Donkey Kong was named John Kirby.

Besides games, Kirby starred in his own anime series, Hoshi no Kirby (the franchise's Japanese name, meaning "Kirby of the Stars"); Sakurai retained a lot of creative input on the show. It was licensed by 4Kids Entertainment, so naturally a lot of the darker elements from the Japanese version were Bowdlerised out. The dub, retitled Kirby: Right Back at Ya!, was still successful, managing to stay on the air for all 100 episodes. There are also many, many manga adaptations of the games, most of which are yonkoma, and most of which have not been released outside of Japan.

Kirby has also been featured as a regular character in the Super Smash Bros. series (also created by Sakurai), and as of Brawl, he is joined by recurring side characters King Dedede (the hammer-wielding, self-proclaimed king of Dream Land who debuted in the very first game as a villainous character, but later became more of an anti-hero) and Meta Knight (an honorable masked swordsman who first appeared in the second game, and has acted as both friend and foe).

Most of the Kirby games are platformers, but the series has occasionally dipped into other genres as well, as highlighted below:

Games in the Kirby series

open/close all folders
Main Series
The main series is demarcated by the words Hoshi no Kirby appearing in these games' Japanese titles.
Spin-Offs
Spin-offs are usually games without the words Hoshi no Kirby in their Japanese titles, and can be distinguished by usually not being platformers or otherwise lacking the traditional gameplay style of the main series. Starting in the 2010s, most Kirby spin-offs are expanded versions of sub-games from previous main series installments.
Other Works

It should be noted that at least three of these games (Kirby's Dream Land 2, Kirby's Dream Land 3, and Kirby 64: The Crystal Shards) were directed by Shinichi Shimomura. Shimomura's titles are slower-paced than others in the series, and various characters introduced in them (Kirby's animal friends, Dark Matter, Adeleine, and Ribbon) don't appear with major roles in other games prior to Kirby Star Allies. Sakurai, meanwhile, has not directed a Kirby game since Air Ride. Starting with Kirby Super Star Ultra, Shinya Kumazaki has taken the director role, and is well-known among Kirby fans for working to flesh out the series' background lore.

Tropes used in the Kirby series: