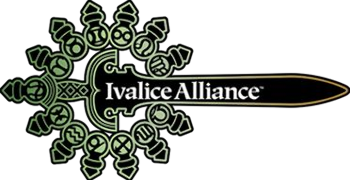 No, really, those zodiac signs make the sword more stabby.
"The heretic trespassed and set the rose of knowledge in Man’s hand.
With imitations they profane, it is anathema to us."
— Final Fantasy XII
Advertisement:

A series of games created by Square Enix, taking place in a shared universe closely linked to the lung-burstingly popular Final Fantasy series.

The series' main director was Yasumi Matsuno, who left the company during the development of Final Fantasy XII due to a combination of illness, Executive Meddling of both his own and his parent company's behalf, and the stress of creating a high-profile project. The series' art design is overseen by Akihiko Yoshida, and the music is composed by Hitoshi Sakimoto. Various other (art/music) directors have also worked on the series over time. Several games in the series were localized by Alexander O. Smith, whose outstanding work on Vagrant Story made him internationally known as a video game translator.

The Ivalice Alliance games are notable for several things:

It should be noted that the term "Ivalice Alliance" doesn't refer to all Ivalice games. However, since this is somewhat arbitrary, the title is used here as the Trope name for convenience's sake. Also, much like with The Legend of Zelda, Word Of God is not all too clear on the exact timeline. Some games inexplicably feature characters from other games as cameos, some events are decidedly "what-if", and most things linking the games together are only very vaguely hinted at. Apply the MST3K Mantra where necessary.

And yes, the whole thing is swimming in Purple Prose.

The release order of the games is: