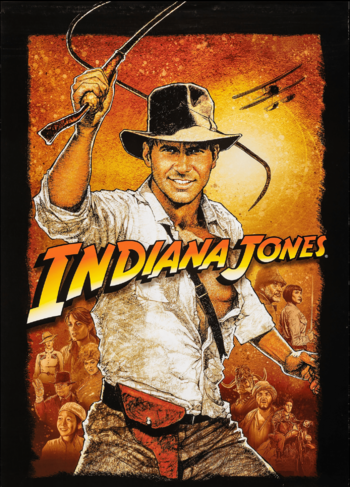 If adventure has a name... It must be Indiana Jones.

Indiana Jones is a multimedia franchise that started with the Dream Team of George Lucas and Steven Spielberg, which were inspired by 1930s cliffhanger serials, and which (re)popularized the concept of the Adventurer Archaeologist. Armed with little more than a bullwhip and attitude ("little more" in this case meaning a .455 Webley), archaeologist Dr. Henry "Indiana" Jones, Jr. (Harrison Ford) discovers long-lost MacGuffins, fights Those Wacky Nazis and Dirty Communists over them and makes love to the Girl of the Week. The films are produced by Lucasfilm and distributed by Paramount (for the first four movies) and Disney (for the fifth).

There are five films in the series, the first three of which are set before World War II, while the fourth and fifth films are set during the Cold War. Steven Spielberg and George Lucas initially planned to make five movies, but capped things off at three... Before revisiting the franchise with a fourth movie decades later. Once Disney purchased Lucasfilm, it was quickly confirmed that a fifth film will be made like Spielberg and Lucas had originally planned. The first four were directed by Spielberg and produced by Lucas, while James Mangold took over for directing the fifth, and Spielberg and Lucas remained onboard as executive producers.

The Young Indiana Jones Chronicles was a TV series produced by George Lucas in the early 1990s. Initially taking the form of hour-long episodes, the show chronicled the adventures of Indy as a young man, principally at the ages of 10 (as played by Corey Carrier) and 16-up (as played by Sean Patrick Flanery). The Carrier episodes focus on Indy touring the globe alongside his parents as part of a world lecture tour given by his father, while the Flanery episodes primarily deal with Indy's service in World War I (in just about every theater!). In each episode, Indy would meet some famous person from the early 20th century, and learn some sort of moral lesson (yes, Lucas very openly intended the series as edutainment). Notably, the show aired in a very Anachronic Order, with Carrier's and Flanery's episodes often alternating. Each episode was also initially introduced by a 93-year old Indy with an eyepatch. One episode however, had a bearded Harrison Ford introduce the adventure.

George Lucas prided Young Indy on managing a film-level quality production on a television budget, helped by revolutions in digital technology, and he has said that the show was partly a test to see how far he could take the later Star Wars prequels. Also like Star Wars, the series was subject to subsequent furious re-editing by Lucas, the new cuts first showing up during re-airings in the late '90s. This re-cut version, which is the only one currently available on DVD, is known as The Adventures of Young Indiana Jones. The Adventures combines the Chronicles episodes into two-hour tele-movies, two shows per film (often in a quite different, and much more strictly chronological, order than in the original airings). Notably, none of the Old Indy bookends are featured in the Adventures (though Harrison Ford's cameo survived the cuts). Years later, it would be revealed that Lucasfilm would be developing at least one Indiana Jones series for Disney+, with reports indicating that the series would involve Abner Ravenwood, a Posthumous Character from Raiders of the Lost Ark and Indy's mentor.

The first three films were adapted into video games of their time mostly with mixed results, but one adaptation of the third film from LucasArts was a fondly remembered point-and-click Adventure Game, Indiana Jones and the Last Crusade, which proved so popular that a follow up with an original story, Indiana Jones and the Fate of Atlantis came out in 1992. The latter had the Fan Nickname of Indy 4 for many years, creating speculation that it would be made into a film.

This was followed by Indiana Jones' Greatest Adventures in 1994, a Super Nintendo platformer retelling the stories of the first three films in compressed form. It was developed by the same studio that did the Super Star Wars trilogy (and even used a recolored version of that series' Han Solo character sprite with an added hat for Indy, appropriately enough.)

There have also been two Indy pinball machines. The first, Indiana Jones: The Pinball Adventure, was released by Williams Electronics in 1993, and features twelve scenes from the original trilogy. The second one was released by Stern Pinball in 2008. Named simply Indiana Jones, it focuses on collecting the various artifacts of the films.

Indiana Jones and the Temple of the Forbidden Eye, a dark ride at Disneyland in Anaheim, California, has you boarding Jeeps. You get, depending on which path isn't occupied, tons of gold/a drink from the Fountain of Youth/sight into the future, so long as you don't look into the eyes of a giant gold head of a god. Someone, of course, looks, the god pulls off his Nightmare Face and you're on your way through a cave full of lava, snakes, and traps. The ride could fit anywhere into the continuity, really-it's in India and has a dangerous god, like the second movie, but the boulder from the first movie shows up and some of the rooms are very similar to the catacombs and desert temple of the third movie. A similar ride is at Tokyo DisneySea, Temple of the Crystal Skull, changing to a South American setting with a sinister Crystal Skull and wind effects replacing the fire and lava. Finally, there's Disneyland Paris' Indiana Jones and the Temple of Peril roller coaster, which was notably once set to send the cars going backwards for several years.

While Walt Disney World didn't get their own Indiana Jones ride, Hollywood Studios DID get the Indiana Jones Epic Stunt Spectacular!, a live action stunt show with massive sets that shows their own take on famous scenes from Raiders: the temple adventure from the intro, the Cairo marketplace and kidnapping of Marion (complete with an exploding truck), and the fight scene on, in, and around a Nazi airplane. This show is completely non-canon as it's dressed up as a "film shoot" of Raiders with the stunt performers claiming to be the actual stunt doubles for the actors. The show includes audience participation (including audience members being taken as "extras" for the Cairo scene), pyrotechnics, various physical stunts, and demonstrations of how different stunts are performed. In addition to the show, The Great Movie Ride, a now-defunct attraction, featured a sequence for Raiders of the Lost Ark.

Between the games, the TV shows on network television and streaming, the ride and the movies, Indiana Jones has become one of the most popular and recognizable characters in a hundred years. Indeed, if adventure has a name...

Media in the franchise includes: