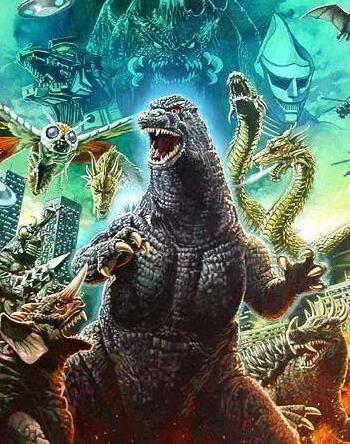 With a purposeful grimace and a terrible sound,
He pulls the spitting high-tension wires down.
Helpless people on subway trains
Scream bug-eyed as he looks in on them.
He picks up a bus and he throws it back down
As he wades through the buildings toward the center of town.
Ooh no, they say he's got to go.
Go go, Godzilla!
Ooh no, there goes Tokyo.
Go go, Godzilla!
— Blue Öyster Cult, "Godzilla"
Advertisement:

The legendary king of the monsters. The atomic dinosaur. Death, the destroyer of worlds. The invincible force of nature, and the key to all coexistence. Up from the depths, 30 stories high, breathing fire, his head in the sky, GODZILLA!!!

Toho's Godzilla films are traditionally categorized into eras, according to when they were made: Showa (1954-1975), Heisei (1984-1995), Millennium (1999-2004) and Reiwa (2016-)note the actual Heisei era of Japan began after the death of Emperor Hirohito on January 7, 1989, but The Return of Godzilla (1984) is considered the first Heisei film due to Godzilla vs. Biollante (1989) being a direct sequel to it. Each era has its own look-and-feel, particularly in its special effects but also in its plotlines, with the Showa series going from grim and serious to balls-off-the-walls goofy, the Heisei series having a more serious tone and an episodic continuity, and the Millennium series being an Anthology series of self-contained films (excepting the Mechagodzilla ones) that wavered between serious and campy. Shin Godzilla, released in 2016, was retroactively declared the first film of the Reiwa era, the latest era in the franchise, which technically began with the ascension of Naruhito to the Chrysanthemum Throne in 2019. Toho announced they are looking forward to releasing new Godzilla movies every 1 or 2 years starting in 2021 with their "World of Godzilla" universe.

Legendary Pictures (The Dark Knight Trilogy, 300, Pacific Rim) released a new reboot of the series in 2014, which was promised to be closer to the original material. Following the success of the reboot, 2 more films by Legendary were scheduled, and a King Kong reboot was later added to turn the setting into a Shared Universe called the MonsterVerse. The new movies themselves are considered by some to be part of their own "era" succeeding the three preceeding eras of Toho films. Toho released their own Godzilla reboot in 2016, Shin Godzilla, separate from the Legendary series, which may possibly result in two running Godzilla series at once. The film is written and directed by Neon Genesis Evangelion creator Hideaki Anno. An anime film trilogy headed by Gen Urobuchi, starting with Godzilla: Planet of the Monsters launching in 2017.

In 2010, IDW Publishing picked up the rights to the Godzilla franchise, producing a mix of standalone miniseries and an ongoing continuity that began with Godzilla: Kingdom of Monsters co-written by Eric Powell and Tracy Marsh and drawn by Phil Hester. This continuity was followed by the singularly titled Godzilla and Godzilla: Rulers of Earth, which became the longest running comic book adaptation of the character.

There Will Always Be a King

After years of rampaging around the world, Godzilla melts down after his nuclear energy reached critical. However, his released radiation is then absorbed by the deceased Godzilla Junior, who is revived as a full-grown Godzilla, having inherited his father's title as King of the Monsters.

Example of:
The Hero Dies

There Will Always Be a King

After years of rampaging around the world, Godzilla melts down after his nuclear energy reached critical. However, his released radiation is then absorbed by the deceased Godzilla Junior, who is revived as a full-grown Godzilla, having inherited his father's title as King of the Monsters.