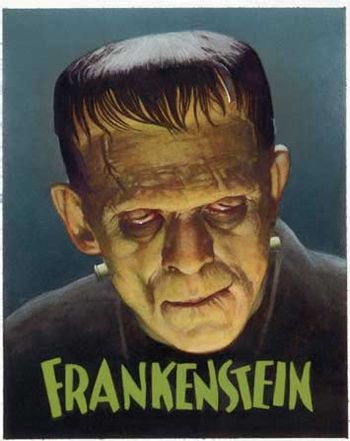 Frankenstein (full title: Frankenstein; or, The Modern Prometheus) is a science fiction novel written by Mary Shelley, originally published in 1818. Victor Frankenstein, an archetypal mad scientist who, through performing morally dubious laboratory experiments, somehow creates new life in the form of a nameless creature; which is confused and horrified by the world it was born into, leading to a furious rampage of vengeance against its creator. Death and tragedy ensue.

Over 200 years later, the aforementioned creature, best known by the moniker of Frankenstein's Monster (to avoid confusion with his creator Dr. Frankenstein), has become a very iconic horror villain in the public domain, appearing in a wide variety of works of fiction.

The following is a (rather incomplete) list of works based on Frankenstein, as well as the tropes usually associated with them.