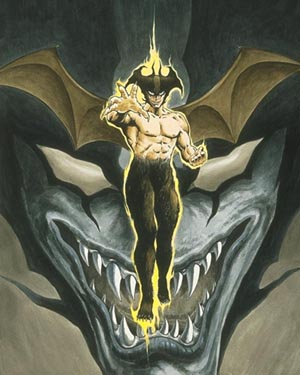 If you think that this image is frightening, turn around because you have seen NOTHING.
Advertisement:

While the TV series was dark by Shōnen anime standards, the manga and most other versions are pure horror, filled with things like graphic violence and dismemberment.

"Will This Be On The Test?"

KaiserBeamz recognizes that Ryo's lecture on demons is important, but that doesn't stop him from complaining about its length.

"Will This Be On The Test?"

KaiserBeamz recognizes that Ryo's lecture on demons is important, but that doesn't stop him from complaining about its length.