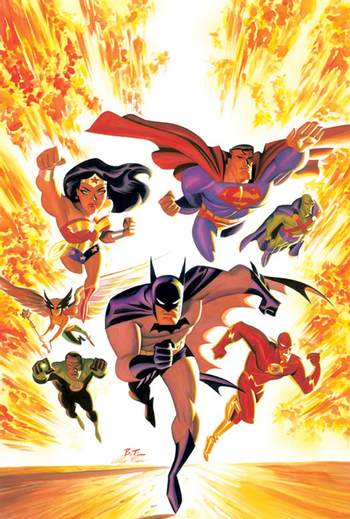 The DC Animated Universe (DCAU for short; also referred to as the "Timmverse" by fans) is a group of animated adaptations based on DC Comics characters and, unlike other DC adaptations, all sharing the same continuity.
Advertisement:

Batman: The Animated Series began first, intended as something of a tie-in with Batman Returns but with its own distinct canon and take on the mythos and airing on the Fox Kids network. The high-quality animation, scripting and voice work received near instant praise, helping to redefine Batman to the general public as neither the campy Adam West Batman or the ultra dark Michael Keaton Batman, but as someone who often has to protect his Rogues Gallery from themselves. The specific character design is referred to as Timm Style, and has been very influential with elements based on it seen in many western animation action shows. After 85 episodes over 3 seasons (65 episodes in the first season alone, generally unheard of) the show ended in 1995. Soon afterward, the same creators went on to make Superman: The Animated Series for the Kids' WB! network, featuring a similar but more streamlined art style. When the license to Batman: TAS on Fox Kids expired, they went on to make an Art-Shifted Sequel called The New Batman Adventures for the Kids WB, which in practice was more of a revival and featured a massive art redesign to match up with Superman: TAS.

The inevitable crossover occurred with "World's Finest", which teamed Batman and Superman against the Joker and Lex Luthor and firmly placed them in a Shared Universe. After several more crossovers, both shows ended about the same time in 1999, when Batman Beyond came on to take their place. While initially divisive for its premise as a teenage Batman in the future mentored by an elderly Bruce Wayne, Batman Beyond was able to continue the legacy of the prior shows and had many standout moments of its own. In fact, an episode featuring a future version of the Justice League proved popular enough that Cartoon Network made an order for the production to create Justice League in 2001. This new show introduced what can be considered a third Timm Style revamp, an attempt to include more individuality between characters that was lost with the streamlined design. With two seasons focusing on seven core members of the Justice League, the production staff made a massive Retool for the series to include dozens of characters never before seen in the DCAU: Justice League Unlimited. After another couple of seasons, reaching the absolute height of ambition to showcase the entire DC Comics roster, the DCAU officially ended in 2006.

There are two other shows that take place in the same universe but are considered more of on the fringe than being a core series. The first is Static Shock, based on the comics character Static and initially taking place in its own continuity (there is a reference to Superman as a fictional character in an early episode) but eventually having contemporary Batman and Justice League crossovers with a Batman Beyond appearance via Time Travel, Static himself appears in Justice League Unlimited in another time travel story. The second is The Zeta Project, which was a Spin-Off inspired by a standalone episode of Beyond about a shapeshifting android assassin gaining a conscience and his struggles to avoid his handlers who want to reprogram him, unique in that it features entirely original characters and stories, excepting a later Batman Beyond crossover. Neither show was as successful as the primary shows, but they had their fans.

It is generally accepted that the DC Animated Universe includes:

Comic Books set in the DC Animated Universe include:

Tabletop Games based on the DC Animated Universe:

Video Games based on the DC Animated Universe:

The DC Animated Universe is sometimes referred to as the "Timmverse" (after character designer Bruce Timm) or the "Diniverse" (after writer Paul Dini). Some purists argue that "Timmverse" is more appropriate, as Bruce Timm was a more consistent creative force in the various shows than Paul Dini, who left before the end of it. Rather more to the point, Dini is a writer, not a character designer. Timm, who is a character designer, is the one responsible for the "standard DCAU art style". On the other hand, the writing of the DCAU is as notable as the art, plus the name is catchier (having three syllables and all). On the other hand, Paul Dini was just the foremost of several writers and worked for Alan Burnett, who thus technically had more to do with the managing of the DCAU than Dini did. The debate continues.

The DC Animated Universe ended production with the final episode of Justice League Unlimited. However, its influence continues to this day both in Comics and Western Animation, and due to the distinct art style of the 'verse (aka Timm Style) being applied to later animated adaptations of The DCU, other properties are frequently and incorrectly cited as part of the DCAU. It is also partially responsible for most of Warner Bros. Animation's production having a Latin American Dub produced in Venezuela.

The Direct to Video DC Universe Animated Original Movies line is considered something of a Spiritual Successor, featuring many of the same production staff with a similar design aesthetic and story tone. The films were originally self contained but eventually formed the DC Animated Movie Universe, a Spiritual Successor to the DCAU by having a line of films form a Shared Universe of its own. Some of these works are extremely close to the DCAU in some fashion, but ultimately in an Alternate Continuity all the same:

The opening theme to Justice League.

The opening theme to Justice League.