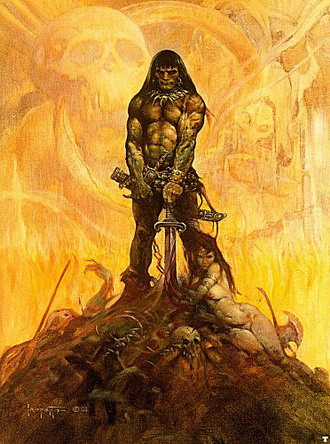 "Know, o prince, that between the years when the oceans drank Atlantis and the gleaming cities, and the years of the rise of the sons of Aryas, there was an Age undreamed of, when shining kingdoms lay spread across the world like blue mantles beneath the stars - Nemedia, Ophir, Brythunia, Hyperborea, Zamora with its dark-haired women and towers of spider-haunted mystery, Zingara with its chivalry, Koth that bordered the pastoral lands of Shem, Stygia with its shadow-guarded tombs, Hyrkania whose riders wore steel and silk and gold. But the proudest kingdom of the world was Aquilonia, reigning supreme in the dreaming west. Hither came Conan, the Cimmerian; black-haired, sullen-eyed, sword in hand, a thief, a reaver, a slayer, with gigantic melancholies and gigantic mirth, to tread the jeweled thrones of the Earth under his sandaled feet."
— The Nemedian Chronicles, as quoted in The Phoenix on the Sword, the very first Conan story by Robert E. Howard.
Advertisement:

The Barbarian Hero. As Dracula is to vampires, Sherlock Holmes is to Private Detectives, and Superman is to superheroes, so Conan is to barbarians.

The titular character is star of a gritty Heroic Fantasy series of stories set in the Hyborian Age, a fictional time period that predates all surviving historical records. Created in the 1930s for Weird Tales magazine, Conan of Cimmeria quickly became Robert E. Howard's (1906-1936) most famous and popular creation. When people think 'barbarian', they often picture Conan.

Not at all influenced by the concept of the 'Noble Savage', Conan represented the ever-present danger posed to civilization by humanity's warlike nature (or vice versa). Howard's stories frequently relied on pulp formulas, much to Howard's chagrin. Howard would try to subvert these formulas wherever possible, especially where they required him to include a perfunctory sex scene. He took great delight in the publication of Beyond the Black River, precisely because it left out sex entirely.

It is possible to see him as a Marty Stu in the sense of being an idealized version of the author, albeit one frequently inconvenienced and for whom victory is far from assured. Yet in Beyond the Black River, Howard included a character that was explicitly stated in one of his letters to be an Author Avatar, and - while brave and capable - he was shown to be inferior to Conan in many ways. Specifically, he was a very young man who looked up to Conan.

Conan reflects Howard's preferences and prejudices; non-Hyborian (i.e. darker-skinned) people are usually untrustworthy, foolish or villains. And snakes... Howard must have been scared of snakes - huge "loathsome serpents" turn up continually, although this could also have to do with his friendship with H. P. Lovecraft. The original Conan stories are actually a peripheral part of the Cthulhu Mythos (although they are, separately, also canon to the Marvel Universe as well).

Two Conan movies were made in the eighties: the first, Conan the Barbarian (1982) put Nietzschean philosophy together with an epic tale of revenge. While it wasn't very accurate to the original Howard stories, owing more to director John Milius's sensibilities, it has become a Cult Classic on its own merits. Its Awesome Music, epic feel, and vivid characters helped launch Arnold Schwarzenegger's acting career. The second movie, Conan the Destroyer, took a more comical and lighthearted tone under a different director, and wasn't as successful and received a negative reception from critics. Plans for at least one more movie fell through. A Continuity Reboot Conan movie, again titled Conan the Barbarian, was released in August 2011. It was generally acknowledged as being more true to the original tales as Howard told them.

There were rumors about plans for Schwarzenegger to reprise the role in The Legend of Conan in the early 2000s, before Schwarzenegger's governorship, and again in 2014, after it. Intended as a movie set during Conan's later years as king of Aquilonia, it would theoretically centre around an ageing Conan who seeks one last adventure before he dies, with the film's producer describing it as "Conan's Unforgiven". It was firmly stuck in Development Hell for many years until it was cancelled in April 2017. Amazon had announced a series in February 2018 with the producer planning to adapt Frost Giant's Daughter - chronologically the earliest Conan adventure taking place in his youth - as the first episode. However, it was reported that project had been cancelled before even getting off the ground. Lately, there has been talk of the series starting up again, now at Netflix. While Conan's future on film and television seems uncertain for now, Schwarzenegger expresses hope that he can play Conan one last time.

There has also been an MMORPG, notable for being unusually bloody for the genre, and several other adaptations in various media. A British game company named Mongoose Publishing, creators of, among other things, Infernum and two successive Judge Dredd Role Playing Games, created a Conan role-playing-game using the D20 ruleset; in addition, Steve Jackson games has GURPS Conan. The most recent TTRPG adaptation is by another British company, Modiphius, and uses their own 2d20 system.

Try not to confuse him with Conan O'Brien. Also has nothing to do with Case Closed or Future Boy Conan.

He wrote a few other Conan-related pieces, like "The Hyborian Age,"

an essay about his fictional setting, and the poem "Cimmeria", evoking Conan's homeland.

For years, the pastiches and modified versions of Howard's stories were all considered Canon while the unedited originals were allowed to fall out of print. Nowadays however, Howard's unedited stories are available on the market again (and provided they're in public domain, the Internet), while the pastiches and modified texts are mostly out of print. In the late 1970s, Karl Edward Wagner curated three volumes of unchanged Conan stories,

exactly as they had been published in Weird Tales, with many of the original illustrations; Ballantine/Del Rey began publishing a complete collection of unedited, uncensored Conan (which is still in print, in three volumes) in 2002.

Comic Books
The character has had a long history in comics over the decades (fitting, as comics are the most direct descendant of the pulp magazines which first gave life to Conan). At first handled by Marvel Comics, the license was then acquired by Dark Horse Comics. The Dark Horse series is the most faithful of all adaptations to date and is endorsed by the Robert E. Howard Foundation. It started out with Kurt Busiek on script and Cary Nord on pencils. It's currently written by Timothy Truman and drawn by Tomas Giorello.

Marvel started publishing Conan comics again in the late 2010s starting including a Crossover with The Avengers in the Avengers: No Road Home series.