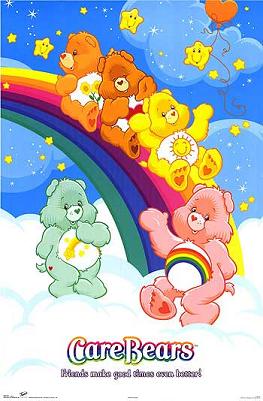 "Care-a-lot is a place we all can go, whenever we choose it..."
Advertisement:

Teddy bears taken to the next level of cute, with pastel colors and symbols on their chest (known as "tummy symbols" or more recently "belly badges"). They live up in the cloud-city of Care-a-Lot and frequently visit Earth to help out kids who are feeling down. The Bears have names relating to their speciality — Good Luck Bear, Friend Bear, and so forth. Later, "Care Bear Cousins" representing other animals were introduced (Brave Heart Lion, Cozy Heart Penguin, and more); they live in the Forest of Feelings about halfway between Earth and Care-a-Lot.

The bears were created by Those Characters From Cleveland and first appeared on American Greetings cards in 1981, contemporary with Strawberry Shortcake. These little guys and gals were a hit right out of the gate when Kenner launched a toy line two years later. They had a lot of animated screentime for the rest of the decade: two specials, a TV series, and three theatrical films over 1985-87. The franchise died in the 90s after a very brief and unsuccessful redesign; compare My Little Pony. The franchise returned after the turn of the millennium.

In most of the films and cartoons, they are pitted against various "heartless" villains who want to make the world safe for evil, often by removing people's ability to care for others... or to feel emotions at all. The baddies ranged from the Mad Scientist Professor Coldheart in the specials and the DIC TV episodes to the Evil Spirit of the first movie to the Ineffectual Sympathetic Villain crew of the later Nelvana TV episodes (evil wizard No Heart, his niece Shreeky, and henchman Beastly). When the chips are down, that's when the Care-Bear Stare comes into play.

They're one of the most spoofed of The '80s toy lines because of their overly sugary reputation — which is not wholly deserved when one takes some of their villains and plotlines into account. On the other hand, they're still quite popular. In 2000, the characters were relaunched with a toy revival and two direct-to-video animated films. In 2007, a redesigned line of the toys arrived along with another DTV film and a Saturday morning series on CBS, Care Bears: Adventures in Care-a-Lot. Adventures in Care-A-Lot is out of production, but the character line launched with the Oopsy Does It continued with films such as Share Bear Shines and The Giving Festival.

On June 2, 2012, The Hub premiered a new series called Care Bears: Welcome to Care-a-Lot, which unfortunately ended up on the chopping board when The Hub changed hands to Discovery Family in October 2014. This possibly occurred because Hasbro neglected the franchise and ended up losing the master license rights to a company called Just Play.note Hasbro obtained the license in late 2007 along with Strawberry Shortcake, but it wasn't until 2012 that the show started airing, and it wasn't until mid-2013 that toys started appearing, which probably displeased American Greetings. However, Netflix commissioned a new show, Care Bears & Cousins. Initially announced for 2016, the show was rushed to production and premiered with six episodes in November 2015 instead. The series is in many ways a continuation of Welcome to Care-a-Lot. It features the same visual style and is clearly set in the same continuity, but adds the Care Bear Cousins and features a much larger role for the young cub character of Wonderheart Bear that was introduced in Welcome to Care-a-Lot.

In 2019, a new series subtitled Unlock the Magic was released on Boomerang in the United States and aired on Tiny Pop in the UK, with the characters having an Animesque feel.

Tropes of the franchise:

In "Belly Ball" from "Care Bears: Adventures in Care-a-Lot," Share Bears stays up all night practicing belly ball. She is at first shown with curved lines under eyes, which quickly become full-on bags. In the morning, we are given a close-up of just how badly she's been affected and Grumpy Bear comments that she looks tuckered and tired out.

In "Belly Ball" from "Care Bears: Adventures in Care-a-Lot," Share Bears stays up all night practicing belly ball. She is at first shown with curved lines under eyes, which quickly become full-on bags. In the morning, we are given a close-up of just how badly she's been affected and Grumpy Bear comments that she looks tuckered and tired out.