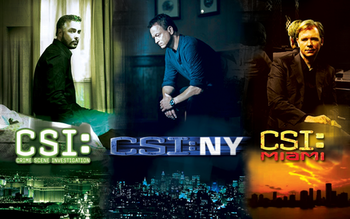 "Beautiful people doing high-tech crime work? Might be a series in that."
— Stewart Lytle Leaning on the Fourth Wall in the CSI episode "Two and A Half Deaths".
Advertisement:

Welcome to the United States of America, but not quite as you know it. In this world, forensic investigators have cool gadgets, look gorgeous and are allowed to conduct entire criminal investigations on their own. Crimes are solved far quicker than in your world, with snazzy flashbacks and re-enactments. Did we mention that lab work is done to funky music, with Real Song Theme Tunes by The Who?

May you die in a interesting way and leave a beautiful (or horribly mangled, whichever works) corpse.

The Verse contains examples of: