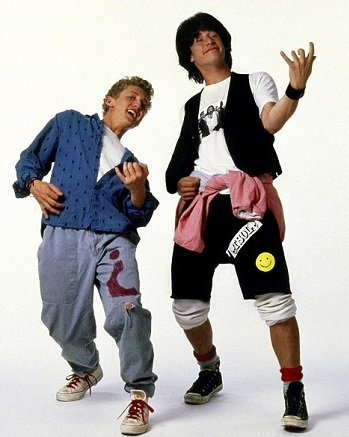 "Dude! We're on TV Tropes!"
"EXCELLENT!"
[guitar riff]
"Be excellent to each other and... Party on, dudes!"
— Credo of Bill and Ted, quoted even by Abraham Lincoln!

The first film was followed by an Animated Adaptation by Hanna-Barbera, Bill & Ted's Excellent Adventures, that was fairly faithful (and even had Alex Winter, Keanu Reeves, and George Carlin reprising their roles), while the second was followed by a forgettable live-action Recycled: The Series that featured none of the original cast (this new cast voiced the characters when the animated edition moved from CBS to Fox and DiC took over production). There was also a surprisingly well-made Eisner-nominated Comic-Book Adaptation, Bill & Ted's Excellent Comic Book, written and drawn by Evan Dorkin and published by Marvel Comics; several video games; and even a little-known stage musical which had a pretty short run but featured a couple of decent songs. There was also a cereal

based on the TV show and a Video Game for the Atari Lynx loosely based on the first film.

From 1992 to 2017, the Universal Studios theme parks in Orlando and Hollywood used Bill and Ted in their annual Halloween Horror Nights event as Bill & Ted's Excellent Halloween Adventure, parodying that year's pop culture and entertainment. The 2009 event, for example, featured Twilight, Megan Fox (well, a male impersonator), Watchmen, X-Men Origins: Wolverine, Star Trek (2009), and G.I. Joe, among many others.

In 2007, the series' creators and writers, Chris Matheson and Ed Solomon, approached Alex Winter and Keanu Reeves with an idea for a third movie in the series, and the pair eagerly signed on. News of the film got out in 2010

, but it seemed to be stuck in Development Hell, though according to all involved that was simply because most films don't get announced this early in production. It was officially announced

, Reeves and Winter announced that production had started and the film is scheduled to arrive in theaters on August 21, 2020.

The third film, Bill & Ted Face the Music, will focus on Bill and Ted in their 50s, dealing with the fact that they still haven't lived up to Rufus' expectations and made the world a utopia, and how the stress starts affecting their relationships with their wives and children. Things only get worse when people from the future come back and tell the duo that they have to write the song that will change the world right now. In order to find inspiration, the duo goes on another time adventure along with their daughters to meet with the greatest minds in musical history. Alex Winter has said that the goal of the movie is to evoke the spirit of the originals without succumbing to "retro cynicism".